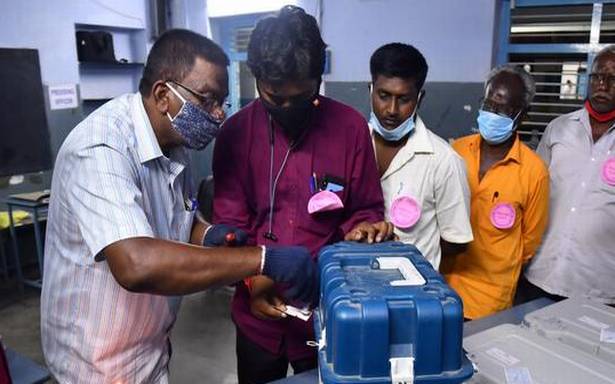 DMK legislator R. Rajendran alleged that the sealing of polled ballot machines was delayed to ensure the victory of PMK candidate.

The movement of polled Electronic Voting Machines (EVMs) from a polling station in Salem West constituency got affected after cadre of different parties raised doubts about the delay in procedure and an election vehicle with EVMs which arrived at the polling station raised confusion.

According to sources, after polling ended at a polling station in Jagir Ammapalayam for Salem West constituency, a zonal officer here allegedly advised polling personnel in the station not to seal the polled EVMs and instead wait.

However, booth agents who were waiting for the EVMs to be sealed saw a vehicle entering the polling station with unused EVMs which were said to be reserve machines. This raised doubts among booth agents and party cadre protested against this. The party cadre alleged that the machines were brought for replacing the polled machine and to manipulate the votes.

DMK legislator R. Rajendran visited the place and alleged that the sealing of polled ballot machines was delayed to ensure a win for the PMK candidate here. He said that sealing and movement of EVMs to counting centre had been affected at eight polling stations here.