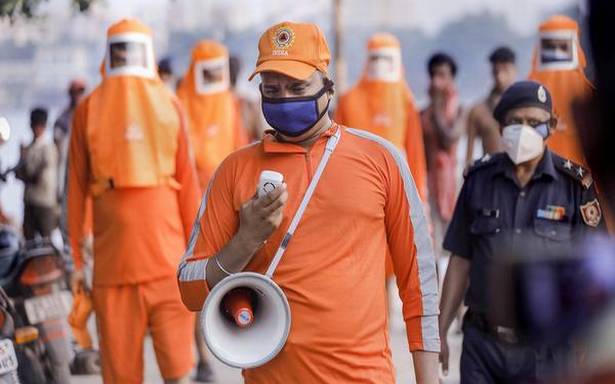 Single dose of vaccine half as effective as double dose against B.1.617.2: U.K.

A single dose of the AstraZeneca vaccine, in the United Kingdom, was only 33% effective in protecting against symptomatic COVID-19 coronavirus involving the B.1.617.2 variant, first identified in India, as compared to a 59% efficacy from two doses of the vaccine, a study by scientists at Public Health England (PHE) and multiple institutions in the United Kingdom has found.

India’s cumulative COVID-19 fatalities crossed the 3 lakh-mark on May 23. With 3,897 deaths till 9.50 p.m. on May 23, the country has recorded 3,03,196 overall deaths. Only the United States and Brazil have registered more cumulative fatalities than India.

Anxiety, depression and post-traumatic stress have been among the most common problems reported by callers to the Social Justice Ministry’s mental health helpline, with many States seeing an increase in calls during the second wave of the COVID-19 pandemic, according to officials.

A train that traverses the longest route of 4,386 km across India became the cause of a major COVID scare in Assam on Sunday morning as scores of passengers stampeded out of a station evading the mandatory COVID-19 test.

A day after four-time MLA Sonali Guha, who had joined the Bharatiya Janata Party (BJP), wrote to Chief Minister Mamata Banerjee, urging that she be allowed to return to the Trinamool Congress (TMC) two other former Trinamool leaders, Sarala Murmu and Amal Acharya, have also expressed their wish to leave the BJP and rejoin the State’s ruling party.

A broad decision has been taken that Class 12 board examinations must be held, but with fewer subjects, and a possible reduction in duration and staggered schedules, according to senior officials who attended Sunday’s online consultation of State and Central Ministers.

Struggling to get quality sparring partners, three-time World championships medallist wrestler Bajrang Punia is keen to train abroad in the run-up to the Tokyo Olympics.

India to push for Covaxin recognition by WHO and EU

Faced with concerns that Indians receiving the Covaxin vaccine may face travel restrictions, the government has decided to help ensure that Hyderabad-based Bharat Biotech receives clearances from both the World Health Organisation (WHO) and subsequently, the EU’s European Medicines Agency (EMA).

Analysis | Rahul overrules veterans to revamp the Congress in Kerala

Congress leader Rahul Gandhi stood firm on appointing V.D. Satheesan as the party’s legislature party leader in Kerala, in the face of stiff resistance against the move from the current incumbent Ramesh Chennithala and former Chief Minister Oommen Chandy. Rivals-turned-allies, Mr. Chennithala and Mr. Chandy have been in control of the party in Kerala for more than five years now. As the defeat of the party in the recent Assembly elections is being attributed to a series of steps taken by the duo, many of their own supporters now want a “generational shift” in the leadership.

Opposition parties back farmers’ protest on May 26

Twelve Opposition parties on Sunday issued a statement in support of the Samyukta Kisan Morcha’s (SKM) call for a national protest on May 26 to mark six months of the farmers’ protest began.