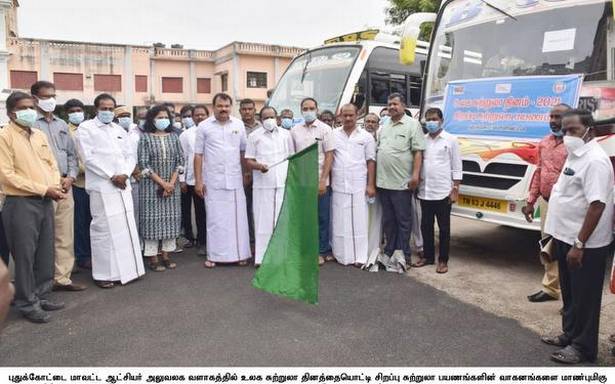 Minister for Law S. Regupathy on Sunday initiated a special tour for persons with disabilities, girl students of sports hostels and general public to take them to various tourists and heritage spots in the district. The tour was organised jointly by the district administration and the Tourism Department in connection with the World Tourism Day.

Three groups were formed separately for the tour- one consisting of persons with disabilities; another consisting of girl students of sports hostels and the third comprising a section of general public who were taken in separate buses arranged for this purpose.

The tour covered various spots including Kundrandarkoil, Narthamalai Kadambar Koil, Vijayalayasozhishwaram, Kudumiyanmalai, Tirumayam Fort, Tiruvengaivasal, Kodumbalur and Kaatubava Pallivasal. In a brief interaction with reporters after flagging off ceremony at the Collectorate campus here, Mr. Regupathy said the tour would not only be an entertaining one but also provide an opportunity for people to learn about each spot. District Collector Kavitha Ramu, District Tourism Officer Nelson and other officials were present on the occasion, an official release said.