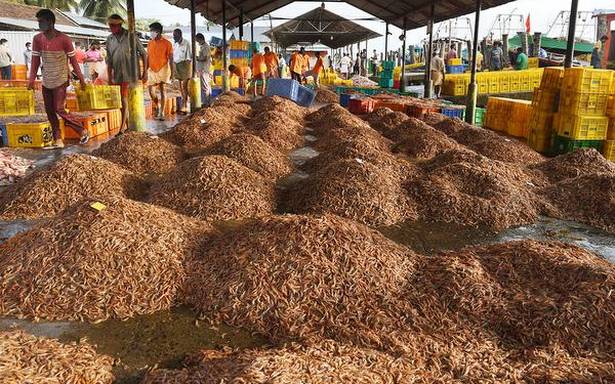 Rising diesel price and low cost of seasonal harvests like shrimp, cuttle fish, and squid have hit boat operators in a big way, with some of them describing the market situation as desperate.

Adding to the slackening demand for local catch is the arrival of fish from the neighbouring Goa and Tamil Nadu, said a boat owner on Thursday.

The price of seasonal wild catch like shrimp has dropped around 80%, said Paul Rajan, a boat owner from Kalamukku. The average market expectation is that a kilogram of shrimp will fetch ₹80 to ₹100. However, the price is so low that a few boat owners are even forced to throw away the catch even as the best quality sells at around ₹60 a kg. The average price has ranged between ₹20 and ₹25 a kg, he added.

One of the reasons being cited for the low price is the stalling of shrimp peeling operations owing to shortage of workers. Mr. Rajan sought the intervention of government agencies to help the struggling boat owners.

Joseph Xavier Kalapurackal of Kerala Boat Owners’ Association said the prices of shrimp, squid, and cuttle fish had fallen sharply this season, plunging boat owners and fish workers into serious financial trouble. He added that cuttle fish price had fallen to around ₹250 a kg from the earlier ₹350 a kg, while the price of squid was now less than ₹400 a kg as against the earlier level of ₹500 a kg. Even the price of locally grown shrimp variety has fallen to around ₹300 and ₹325 from the earlier level of ₹450 a kg.

The rising price of diesel, now hovering around ₹94 a litre, is one of the reasons why boat owners are unable to cope with the market situation, Mr. Kalapurackal said.

Each fishing expedition requires at least 400 litres a day, making the input cost quite high. Besides, boat owners have to pay ₹26,500 for permits for boats which are more than 20 metres long.

It is estimated that there are around 3,600 boats operating off the cost of Kerala, with Kochi and Munambam accounting for around 600 boats, he added.