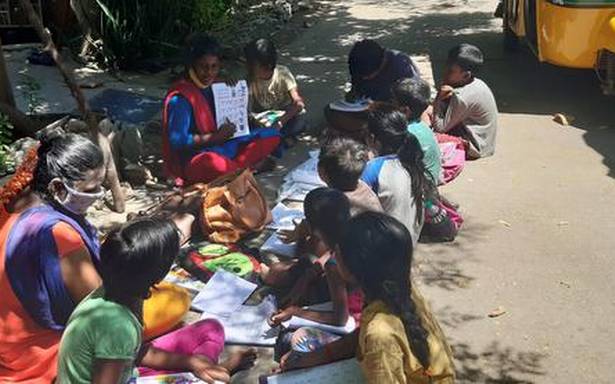 During the pandemic months when institutions were shut, Asha teachers ran this initiative on terraces. Will they get to be volunteer-teachers in the template offered by the government?

For context, Illam Thedi Kalvi with its evening classes — with one volunteer-teacher for every 20 students — has kicked in with the schools having reopened, from the lower classes up. This government programme is expected to be run for six months, serving as a supplementary learning opportunity that would help make for lost time.

In the months since the Coronavirus outbreak, Asha for Education could run these Mini Schools as it was working closely with government schools prior to the pandemic.

“Asha for Education pays and appoints teachers to government schools. We are supporting around 100 government schools in this manner. We support them in two ways — one, we send regular teachers who will work alongside the government teachers in schools that are understaffed. The second model that we follow is to send computer teachers. The same teacher will go to multiple schools. One teacher will go to three or four or five schools, because in rural areas, schools tend to be very small. If there are 40 to 50 students in a school, the teacher will go one day a week to teach them computer science and using computers, they would teach math and English in an innovative way,” says Rajaraman Krishnan, coordinator for the Chennai chapter of Asha for Education. He points out that with the schools having reopened from the lower classes up, their Asha teachers are also going back to the government schools they have been attached to.

However, there is a question lingering over its 65 Mini Schools, which include four in Chennai, three in Chengalpattu and around 30 in Thiruvallur.

Questioned about the future of this initiative, Rajaraman says: “We were thinking of continuing to do that in the evening, but if the government chooses to do that in all the villages in the evening, we plan to work with them, rather than try to create any alternate system, which would not work. All our teachers are willing to be associated with the Illam Thedi Kalvi scheme. If these teachers are selected and appointed as volunteer-teachers then we will not double up the effort to create an alternate system. Instead, we will be implementing the Illam Thedi Kalvi scheme as its volunteers in those villages. Asha has always been in the business of bridging the government school system, we will get back to that mode.”

“We have been running four mini schools in Chennai, a couple of them in the RA Puram area. The other two are guided by a unique vision — both being run for the benefit of government school-attending children in Narikuravar colonies, one in Indira Nagar and the other in Kottur. In Chengalpattu district, we are running a mini school each in Nadhivaram, Kattankulathur and Kayarambedu.”

Rajaraman notes that if Asha teachers get to be volunteer-teachers as part of Illam Thedi Kalvi, they would hit the ground running, as they have been doing this form of teaching for months now anyway. “Now that our teachers are working with the children for one and a half years, we are fairly plugged into the whole system, and as long as there are some meaningful decisions, I am sure they will appoint Asha teachers in these villages.”

Rajaraman observes that if the HMs of the various schools have a significant say in the selection of volunteer-teachers, they will have the Asha teachers continue the work, but under the Illam Thedi Kalvi format.

Will the Asha teachers be prepared to handle the workload. When schools were shut, an hour or two of evening classes would not have been a drain on their energy and time, but now?

Rajaraman explains, “Basically, teachers who have their own family and children, they do not want to have the double duty. They have to go to the school during the day and they do not want to have any work from 5 p.m. to 7 p.m., but teachers who are not married, and whose children are older, they are okay with taking it up and they have already volunteered to do this in their places. I was very heartened that they volunteered to do this even without us assuring them an extra pay for that. So, they are quite keen to continue with this.”

An education project in Narikuravar colonies in Chennai

The Mini Schools being run by Asha for Education in the Narikuravar colonies in Indira Nagar and Kottur are an organic outgrowth of a social-empowerment project that predates the pandemic.

“Even prior to Corona, it was a little different from what we were doing elsewhere. Our support was not generic support for the government schools in these localities; but was instead a support specifically for the Narikuravar children that went to these schools,” reveals Rajaraman Krishnan, coordinator for the Chennai chapter of Asha for Education.

The project was named “Manigal” in a reference to beads being sold by Narikuravars, he notes.

Narikuravar children tend to lag behind the rest of the children even in government school. The value for education is not much appreciated by most parents in the community. Often they would not send the children to school in time.” Rajaraman observes that due to this and other factors, HMs would not feel drawn to intervening and turning things around when these children drop out of school.

“The dropout rate would be high. When we started work in the Narikuravar colony in Indira Nagar 12 years ago, not a single person had gone beyond the eighth standard. Now, there are five to six college students. Two or three have finished their college education. Only by creating such role models can we bring value for education in the community. Some of them are associated with Asha in some way, but broadly by being a college graduate and being employed, they automatically become a role model for the children, without any notion of charity.”

The NGO started working in the Narikuravar colony in Kottur four years ago.