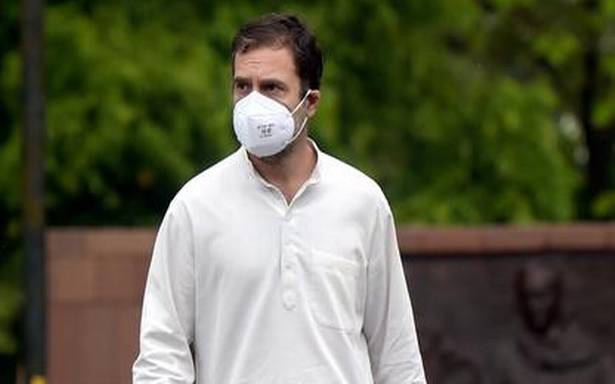 The chart showed that the actual vaccination was 27% less than the target.

Congress leader Rahul Gandhi on Saturday claimed a growing gap between the actual and targeted vaccinations and asked where are the vaccines.

“Mind the gap,” Mr. Gandhi said on Twitter along with a chart highlighting the difference between the targeted and actual vaccinations.

The chart showed that the actual vaccination was 27% less than the target.

He also used the hashtag “WhereAreVaccines” to press the point that the current vaccination drive was slow.

On Friday, Mr. Gandhi took a swipe at the government saying that July has come but vaccines have not, drawing a sharp retort from the BJP which cited figures to ask if spreading “confusion” was the opposition party’s undeclared policy.

“July has come, vaccines have not. Where are vaccines,” he tweeted.

Union Health Minister Harsh Vardhan hit back noting that he had on Thursday put out facts on vaccine availability for this month, and said there was no vaccine for the “virus of ignorance”.

“Just yesterday, I put out facts on vaccine availability for the month of July. What is Rahul Gandhi ji’s problem? Does he not read? Does he not understand? There is no vaccine for the virus of arrogance and ignorance!! INC India must think of a leadership overhaul!” the senior BJP leader tweeted.

The BJP also hit out at Mr. Gandhi and claimed that people often ask why maturity, wisdom and responsibility have not come to the Congress leader “despite the passage of 51 Julys”, a reference to his age.

The Congress had hit back with its spokesperson Supriya Shrinate saying Ministers in the Narendra Modi government have forgotten their work of handling their Departments and are instead acting as “petty, two-rupee trolls”.