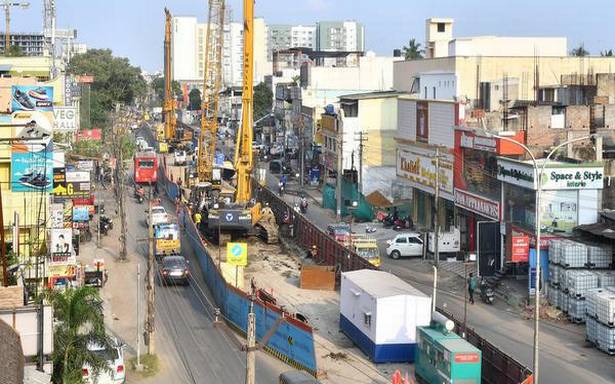 When commuters travel in Metro train under Phase II project in about four years from now, switching between two stretches — Corridor 4 and Corridor 5 — will be seamless as they will run parallel to each other for five km. This will primarily help people living in and around Poonamallee, Kattupakkam, Karambakkam, Porur and neighbouring areas travel to any northern or southern part of the city comfortably.

The Phase II project has begun in the city and it is being built with three corridors — Madhavaram to SIPCOT (Corridor 3), Light House to Poonamallee (Corridor 4) and Madhavaram to Shollinganallur (Corridor 5) and with funding from the State and Union governments and international banks, ₹61,843 crore would be spent on construction of this project.

According to officials of Chennai Metro Rail Ltd. (CMRL), the double decker stretch will include four stations built at two levels — Alwarthirunagar, Valasaravakkam, Karambakkam and Alapakkam. While the Corridor 4 will be on the first level and will be constructed at 13.5 metres above the ground, Corridor 5 will be raised above this level at a height of 21 metres.

“The work has been going on for a few months now and after soil testing, the contractor has been executing pile work after which pillars will be raised. These two stretches will run with shared pillars for 5 km. And, there will be common concourse (ticketing level) and two different platforms,” an official said.

The advantage is, any commuter from Porur can travel quickly to places like Adyar, Mylapore, Shollinganallur, Taramani, Madhavaram, Retteri, Majambakkam and CMBT.