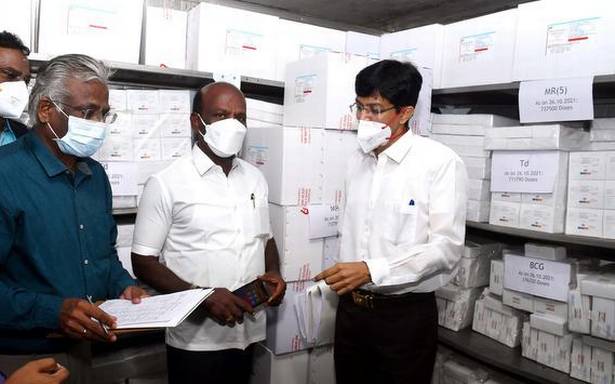 The camp will be mostly for those requiring Covishield doses

The State will conduct another mega vaccination camp on Saturday. This week too, 50,000 centres will administer preventive vaccines for COVID-19, health minister Ma. Subramanian has announced.

The camp will be mostly for those requiring Covishield doses. The minister announced this after inspecting the vaccine depot at the DMS here on Tuesday.

On Wednesday, the minister and health secretary would be participating in a meeting hosted by Union health minister, Mr. Subramanian said.

The Union government had invited health ministers and secretaries of all States to appraise them of the next course of action now that the country had crossed the 100 crore vaccination target.

The State government had also, in the meanwhile, prepared a list of demands to present to the union government, the minister added.

The State would seek 10 lakh doses of Covaxin, he said.

For each of these hospitals the State has proposed to seek ₹50 crore.

"Once the finance is sanctioned the place for establishing the facility would be finalised taking into consideration the population and the available health facilities," he added.

The State would urge the Union government to give approval for another 800 seats in the 11 new medical colleges. The union government had approved of only 850 seats earlier.

The inspection committee that visited the colleges had urged the State to complete the required infrastructure needs in four medical colleges.

The State had completed the work as suggested by the inspection committee, which in turn, had virtually inspected the colleges and was satisfied.

To a question on vaccinating students admitted to colleges to enable them to start attending physical classes, the minister said the Union government had been in consultation with the ICMR, which had been of the view that vaccines could be administered.

The minister urged people to continue the safety protocols even during festival times. He further said people should follow the protocols for another year at least to prevent the spread of the infection.