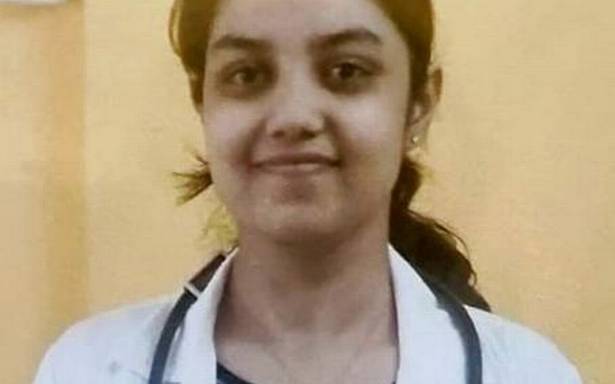 Locals stage protest; police take up case against BBMP for not maintaining roads

A 19-year-old medical student was mowed down by a Bruhat Bengaluru Mahanagara Palike (BBMP) truck while she was negotiating a bad stretch on Hennur Main Road on her two-wheeler. The incident occurred around 11.45 a.m. on Saturday. Tasdeeq Bushra died on the spot following which locals staged a protest demanding action against the civic body.

“The deceased was a first-year MBBS student and a resident of Lingarajapuram. She was returning home on her scooter after attending class,” a police officer said.

While she was approaching St. Charles High School on Hennur Main Road, she came across a pothole-ridden stretch. She was trying to negotiate the potholes when the truck coming from behind hit her scooter.

“On impact, she fell from the two-wheeler and came under the wheels of the truck,” the officer added.

The Pulakeshi Nagar police arrested the driver Palani Muniswamy, 50, and booked him for reckless driving and death due to negligence. “We are also charging the BBMP officials concerned for not maintaining roads and not filling potholes,” said M. Narayan, DCP Traffic (East).

For the past several months, motorists and pedestrians have been up in arms against the sorry state of roads not just in the Central Business District (CBD), where many stretches are being developed under Smart City, but also in outer zones where roads have been dug up for laying of utilities. Motorists and cyclists allege that the dug-up roads are a safety hazard.

Civic Commissioner N. Manjunath Prasad said he has ordered an inquiry into the case. “I have asked senior engineers to visit the accident site and submit a report with photographs of the road. If the accident is found to have been caused by a bad stretch, stringent action will be taken against the officers responsible,” he said.