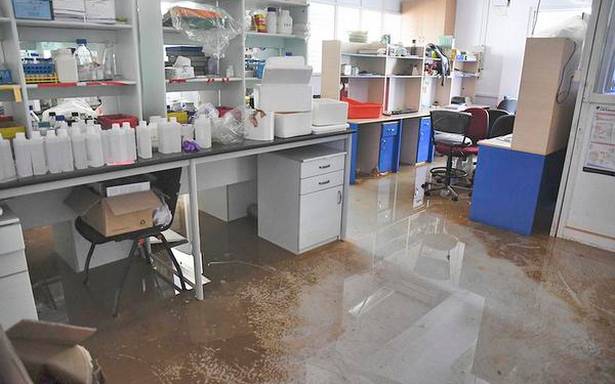 At Yelahankha,rajakaluves will have to be widened to at least 30 ft

The extensive flooding in many parts of Yelahanka and Byatarayanapura assembly constituencies has been attributed to unprecedented rain that lashed in a couple of hours and the narrow stormwater drain network.

Undertaking an inspection of rain-affected Kendriya Vihar, Jawaharlal Nehru Centre for Advanced Scientific Research (JNCASR), and the Manyata Tech Park on Tuesday, Chief Minister Basavaraj Bommai said he had directed officials to draft a master plan to widen rajakaluves and build diversion canals to address the problem of flooding..

The heavy rains had resulted in many lakes in Yelahanka overflowing. “The existing rajakaluves are narrow with a varying width of just 8-10 feet. This is not sufficient to carry the huge volume of discharge,” he said.

The problem had its source at Yelahanka lake which is connected to 11 more lakes upstream. The heavy rains had led to overflow from all the lakes to Yelahanka lake which has two narrow rajakaluves that are either choked or are encroached at different points, he stated. These drains would have to be widened to at least 30 ft. The required land could be acquired through TDR (transfer of development rights). The Government will also coordinate with the National Highways Authority of India (NHAI) for the construction of a drain across the highway, he said after assessing the situation at Kendriya Vihar residential complex that houses 603 flats. Flood waters flow through Yelahanka lake and down to Jakkur lake, Rachenahalli lake, and then towards K.R. Puram to join the Pinakini before entering Tamil Nadu.

“Measures will be taken to widen the rajakaluves and build diversion canals. Action to divert the waters from inundated apartment complexes and institutions would also be initiated,” he said. The Government had recently directed the civic body to take up strengthening and remodelling of 50 km of rajakaluves, apart from widening and clearing encroachments.

He admitted that many apartments that had come up on the buffer zone of drains and lakes had been most affected. He said such areas would be identified and work on clearing encroachments, strengthening the drain network taken up on priority basis.

Mr. Bommai said BBMP had identified 714 illegal structures on the rajakaluves. Those belonging to lower socio-economic groups would be rehabilitated, while other encroachers would be given time to move out before their buildings/ structures are demolished.