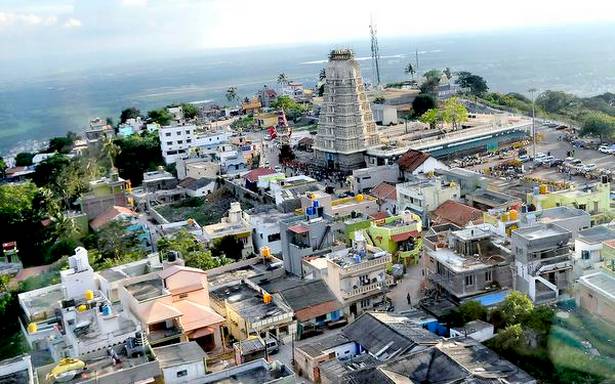 Writes to PM to increase its green cover instead

Saraswathi Samman awardee and Kannada writer S.L. Bhyrappa has expressed his anguish over the State government’s move to ‘develop’ Chamundi Hills under Pilgrimage Rejuvenation and Spiritual, Heritage Augmentation Drive (PRASHAD) scheme and said that it is environmentally unsustainable.

He has sent a letter to Prime Minister Narendra Modi requesting him to ask the Tourism Ministry to apply the true spirit of an ‘imaginatively and beautifully conceived concept of PRASHAD’ to promote spiritual tourism for a project in Chamundi Hills in Mysuru.

“What I have heard about the project proposal submitted by the Karnataka government has pained me. It is concentrating more on the modern concept of architecture using concrete and environmentally unsustainable materials. What we need is to demolish the already existing concrete jungle and restore the natural beauty of the hill with minimum interference from contractors. The proposal adds some more to the concrete jungle in the name of glamorizing it,” said Mr. Bhyrappa in his letter.

He instead suggested a slew of measures for the conservation of Chamundi Hills and called for planting more trees suitable to the terrain.

“Around the temple, on the hill top, we should have massive planting of trees instead of the artificial roof constructed. For the most part today there are hardly any trees and the proposal also does not talk of any greening,” said Mr. Bhyrappa.

The letter also drew attention to increase in the population atop Chamundi Hills. “With over 4,000 residents atop the hill which was hardly in hundreds few years back, it has reached unsustainable levels. We should limit houses only to priests and working staff of the temple. All other houses should be relocated in the city and compensated as we have done with tribals in some reserve forests,” the letter added.

He also called for restriction on the movement of vehicles and said all private vehicles including VIPs (as a model to others) should be banned and only electric operated buses should be allowed.

The earlier government constructed, with cement and bricks, a parking lot for 600 cars and 100 commercial shops.

They have converted the hill top to commercial centre destroying the Yatra centre which it was earlier, and the serenity and peace has been totally destroyed, said Mr. Bhyrappa.

Instead of Chamundi Hill copying Hampi or Tirupathi, it should develop its own development model for others to adapt and only pooja materials should be sold and the atmosphere on the hill top should be conducive to people who want to meditate, he added.

Mr. Bhyrappa also said his suggestion was in compliance with what Mr. Modi had proposed during the Paris summit in 2015 to fight climate change. “It is to adapt India’s civilization message of ‘simple living, high thinking’. One other unintended benefit is that we do not need to spend huge funds to implement what I am proposing,” said Mr. Bhyrappa.