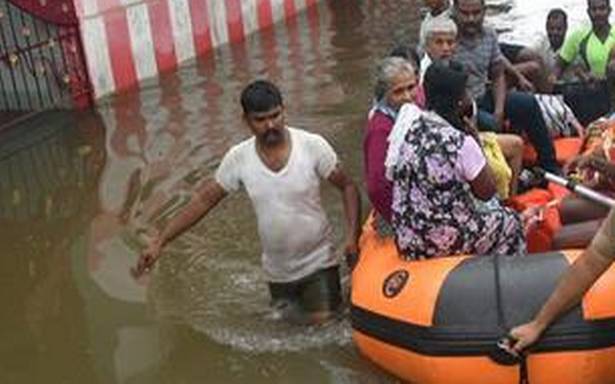 Marooned residents from low-lying areas along the Bengaluru Highway in Vellore were rescued by the Tamil Nadu Fire and Rescue Services on Friday.

These localities, to the rear of the Vellore Fort, were flooded after lakes, including Sathupueri, Otteri and Sitheri, breached in the rain that lashed the district since last week.

A nine-member team, led J. Thanigaivel, Chief Fire Officer (Vellore), deployed inflated boats and brought the residents out of their homes. At present, 403 persons, including 77 children, have been moved to government shelters since October 1.

“Desilting of the canal and its drains is the permanent solution. Every monsoon, our houses and shops get flooded,” said P. Mani, 72, president, Vellore Wholesale Mango Association.

With the discharge of excess water from the Kalavagunta dam in Chittoor district of Andhra Pradesh and the inflow from the tributaries of the Ponnai, 15,000 cusecs and 15,851 cusecs was released from the Poonai and Palar anaicuts respectively.

As a result, the Vellore and Ranipet Collectors have issued a flood alert for 22 villages along these rivers. Friday’s flood alert was the fifth one since October 1.

The Ranipet district administration has warned residents living along the riverbanks not to cross the river and its check-dams. At present, 157 affected persons have been put up at 47 shelters.

“We issued free house site pattas to 67 persons from the backward communities, including the Irular and the Narikuravar, on Friday as they are the most affected people,” Collector D. Bhaskara Pandian told The Hindu.

The crops, mainly paddy, standing on 55.55 hectares in Vellore, 134 hectares in Ranipet and 34.47 hectares in Tirupattur have been damaged.

Agricultural areas like Arcot, Nemili, Sholinghur, Gudiyatham, Katpadi, Anaicut, Natrampalli, Tirupattur, Kandali are the most affected due to rains. Around 500 marginal farmers have been affected in these districts.

In Tirupattur, three bridges at Pudupet, Katteri and Pambaru have been damaged.

Traffic was diverted after boulders rolled off the Yelagiri Hills and damaged the roads in the hills. Collector Amar Kushwaha inspected the farmers’ market at Tirupattur, which was damaged. So far, 249 affected persons, including 23 children, have been taken to two government shelters.