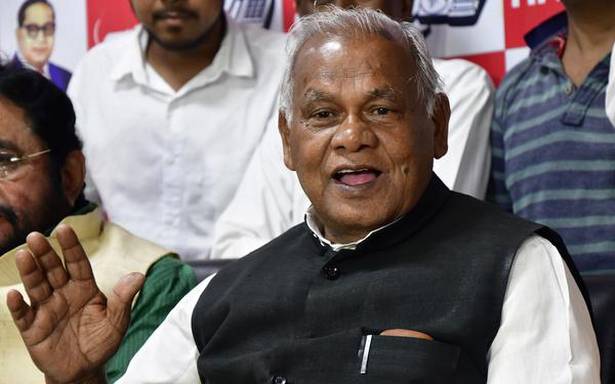 Former Bihar Chief Minister and president of Hindustani Awam Morcha (Secular) [HAM-S]Jitan Ram Manjhi, has hit headlines recently because of his remarks allegedly offending upper castes. In caste-ridden Bihar, Mr. Manjhi’s comments have evoked condemnation from Opposition parties for his “uncalled for utterances” but a curious silence from coalition allies.

Coming from the Dalit community, which comprises about 16% of the population in the State, Mr. Manjhi while addressing a gathering of his own Musahar caste on December 19, took on the upper caste Brahmin community. Members of the Brahmin community later protested against his remarks, with some sitting outside his residence to perform puja.

As the protests grew shriller, Mr. Manjhi, in a U-turn said his remarks were meant for his own Musahar community and “not against Brahmins”.

But he was forced to rescind the line facing a reaction from the Musahars. In another volte-face, he asserted that his cuss words were against those Brahmins who “eat meat and drink alcohol while pretending to be holier than thou”.

A few days later Mr. Manjhi hosted a feast for Brahmins at his house attended by members of the upper caste community.

Similarly, Mr Manjhi earlier, had made a controversial comment against Lord Ram saying he was a “factious character”. His comments immediately invited sharp reaction from members of the upper caste Hindu community. However, while only two BJP MLAs attacked Mr Manjhi, neither the BJP nor JD(U) — coalition allies in the State — condemned him for his remarks.

Further, when a local BJP leader from Darbhanga, Gajendra Jha, protested against Mr Manjhi’s anti-Brahmin comments, the BJP expelled him from the party. When BJP MLA Niraj Kumar Singh ‘Babloo’ said it was time Mr Manjhi to pass his time in offering obeisance and puja to lord Ram, HAM(S) spokesperson Danish Rizwan dared the BJP to keep his party out of alliance. “If HAM(S) is removed from the alliance, the NDA government will fall in the State,” said Mr Rizwan.

Later, senior State BJP leader Sushil Kumar Modi said party men should not rake up Mr. Manjhi’s remarks as he had thrown a feast for Brahmins. The JD(U) leaders, too, preferred not to respond to Mr. Manjhi’s comments.

“It’s has been Mr. Manjhi’s calculated move to consolidate his dwindling vote among his own Dalit community. Bihar is a caste-ridden society and being a seasoned politician, Mr. Manjhi has been making such comments with a clear political motive,” political commentator and former Patna University professor Nawal Kishore Choudhary told The Hindu over phone.

When asked why Mr Manjhi has been trying to consolidate his Dalit vote bank, Mr Choudhury added, “because now there are two other parties claiming the same vote bank: Lok Janshakti Party led by Chirag Paswan and another one (Rashtriya Lok Janshakti Party) led by his uncle Pashupati Kumar Paras.”

Political analyst Ajay Kumar echoed the explanation. “Mr. Manjhi has been in politics for several decades and whatever he has been saying, of late, must have some political meaning to it. He is a shrewd politician knowing which way to swing to remain in power,” he said.

Explaining the BJP’s silence on the issue despite its upper caste vote bank, Mr Kumar said, “In present caste-ridden political scenario of the State no party can afford to antagonise the Dalit or Extremely Backward Classes (comprising nearly 29%) vote bank which constitute a large section in society.”

“That is why Mr Manjhi is politically indispensable for all political parties in Bihar. He has been with Rashtriya Janata Dal, Janata Dal (United) and BJP at regular intervals and can switch over to either way at his political convenience,” he added.

Mr Manjhi’s party HAM(S) has four MLAs in the Assembly.

“To remain politically relevant one should say what Mr Manjhi has been saying recently. It creates social disharmony and disturb fabric of our society”, senior state Congress leader and party MLC Prem Chandra Mishra said.

“But, Mr Manjhi’s comments have deep political meaning which suits him and his alliance partners and they deliberately keep mum over it,” senior RJD leader Shivanand Tiwari said.