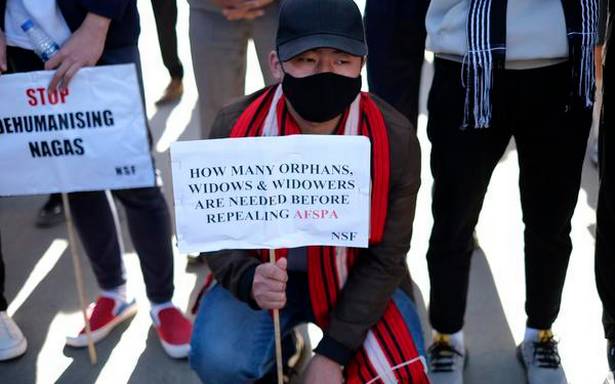 It calls for united agitation to seek repeal of Act

The Congress has slammed the Centre’s decision to extend the Armed Forces (Special Powers) Act (AFSPA) in Nagaland days after the Ministry of Home Affairs (MHA) set up a panel to decide on withdrawing the Act in the State.

The Congress general secretary, communications, Randeep Surjewala, in a tweet accused the government of pushing “a hitherto peaceful North East into an abyss of lawlessness, insurgency and chaos”.

Since December 4, when 13 civilians were killed in a botched operation by the Army near Oting in Mon district, the protests against the AFSPA have sharpened in the State and the entire northeast.

“The utter lack of understanding of the ethos of its people, its diversity, its concerns and attempt to annihilate democracy to usurp power has led us to the current state,” Mr. Surjewala tweeted.

The MHA instituted a committee headed by Registrar General of India Vivek Joshi and it has been given six months to submit a report.

The Congress termed the latest extension baffling and called for a united agitation to seek repeal of the Act.

“Despite condemnation and protests against arbitrary and indiscriminate abuses #AFSPA has again been extended in #Nagaland. Time for raising a united voice for repeal,” party’s MP from Assam Pradyut Bordoloi tweeted.