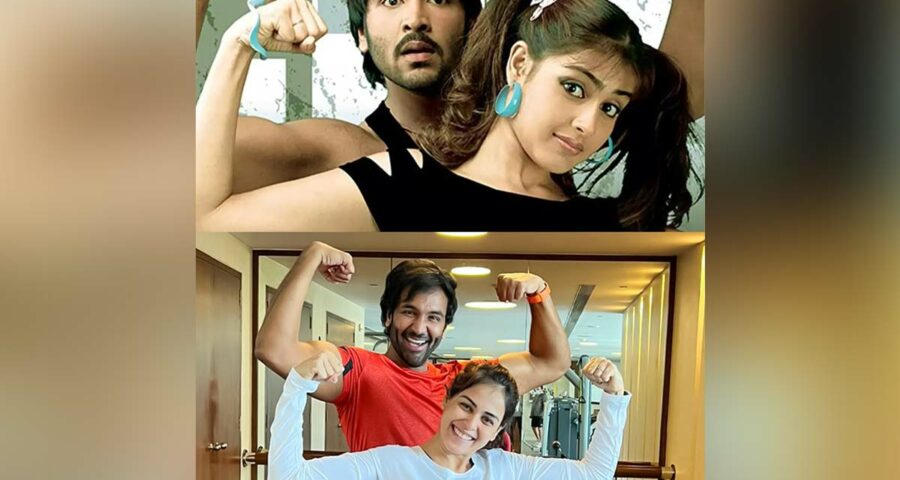 Dhee is an action comedy film directed by Srinu Vytla, which was released in  2007 and it won two Nandi award. The film stars Vishnu Manchu and Genelia D’Souza whereas Srihari and Brahmanandam play supporting roles. It was remade into Tamil under the title Mirattal and in Bengali as Khokababu. A sequel titled D and D: Double Dose has been announced in 2020 but there is no update regarding this project. Yesterday the Dhee lead pair- Vishnu Manchu and Genelia D’Souza  met in a gym and recreated an iconic still from their movie.

Manchu Vishnu  who is an active user of  the social media sites, took to Twitter and shared the pic , he came up with an interesting caption, “ My Tinker bell and me. Nothing has changed since we met Genelia. Powerful Bond, forever.” Genelia D’Souza also shared the pic as her Instagram Story.

On the work front, Maa President Manchu Vishnu  is currently busy shooting for his next, which is  is funded by AVA Entertainment, and it has the music by Anup Rubens.  RX 100 fame Payal Rajput and Sunny Leone are playing the female leads. It is progressing at the brisk pace under the direction of Ishan Surya.