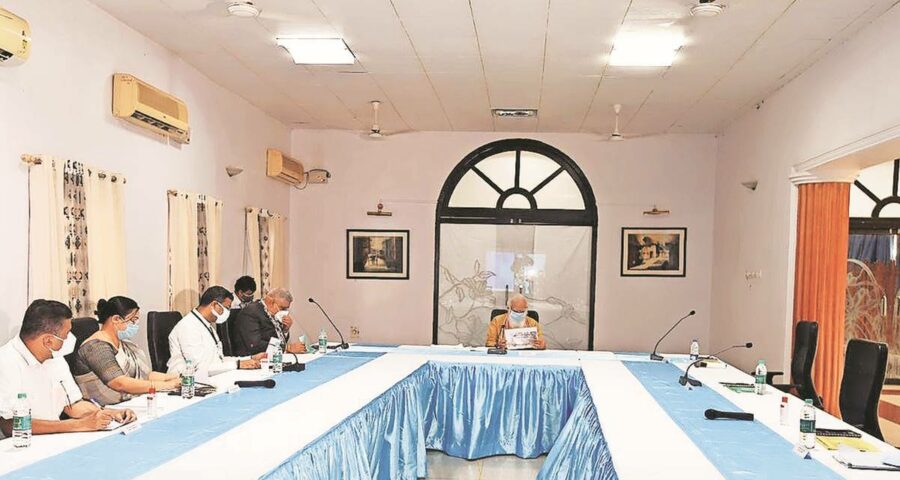 While top BJP leaders criticised Banerjee for not attending the PM’s meeting and Union Home Minister Amit Shah described her conduct as “an unfortunate low”, Trinamool leaders blamed the Centre for indulging in political impropriety. In just three weeks since the Trinamool Congress returned to power, the face-off between the West Bengal government and the BJP-led Central government has sharply intensified with Chief Minister Mamata Banerjee Friday skipping a review meeting on Yaas cyclone called by Prime Minister Narendra Modi, and the Centre recalling Chief Secretary Alapan Bandyopadhyay to Delhi to serve the Union government. The Centre had just four days back on May 24 approved a proposal by the state to extend his tenure by three months till August 31.

While top BJP leaders criticised Banerjee for not attending the PM’s meeting and Union Home Minister Amit Shah described her conduct as “an unfortunate low”, Trinamool leaders blamed the Centre for indulging in political impropriety. The meeting was between the state government (CM and state officials) and the Centre (PM and Union officials), so it was unusual to invite Suvendu Adhikari, a former Trinamool leader, who had switched to the BJP ahead of state elections, and is the Leader of Opposition now, and other BJP leaders, they pointed out.

Besides Adhikari, those present at the Prime Minister’s review meeting included West Bengal Governor Jagdeep Dhankhar and Union Ministers Debashree Chaudhuri and Dharmendra Pradhan. But there were no representatives from the state government.

Though Mamata did not attend the review meeting, she along with Chief Secretary Bandyopadhyay met Modi ahead of it and submitted two reports demanding Rs 10,000 crore each for the development of Digha and Sunderban.

After her brief 15-minute interaction with the PM — the first since the Trinamool Congress returned to power in the state — at the Kalaikunda air base, Banerjee left for a review meeting with

Prior to meeting the Prime Minister at Kalaikunda, Mamata Banerjee had conducted an aerial survey of North 24 Parganas and South 24 Parganas districts. This was the first time the two had came face to face in almost four months. Last, they attended an event together was on January 23, to mark the birth anniversary of Netaji Subhas Chandra Bose at Victoria Memorial.

In a tweet later in the day, Adhikari said the Chief Minister was indulging in petty politics. “Today is a dark day in India’s long-standing ethos of cooperative federalism, a principle held sacred by PM @narendramodi… The way @MamataOfficial Didi behaved… reflects her dictatorial nature and lack of respect for constitutional values,” he wrote in the tweet.

Describing her behaviour as “painful”, Union Defence Minister Rajnath Singh said, “This is an unfortunate example of placing political differences above the constitutional duty of public service, which is the core of the Indian federal system…” Governor Dhankhar, BJP President JP Nadda and Union Minister Dharmendra Pradhan also took to social media and came down heavily on Mamata Banerjee.

Trinamool leaders, however, said Central ministers were ganging up on Twitter. “… Some people never learn. After murdering federalism, they must know that federalism is not one way traffic. LEARN from her, dont lecture her,” said Trinamool Rajya Sabha member Sukhendu Sekhar Ray in a tweet. Party spokesperson Kunal Ghosh said the review meeting was supposed to take place between the CM and the PM. “What were the BJP leaders doing there? What are they supposed to review? It is Chief Minister Mamata Banerjee who will talk about the damages caused by the cyclone and submit a report… Moreover, she met the PM and said what she had to say,” he said.

The sudden recall of Bandopadhyay, the Chief Secretary who had accompanied Mamata through the day, also came as a rude shock to the West Bengal government, which had just four days back secured a three-month extension for him. “Has this ever happened… forced Central deputation of a Chief Secretary of a State. How much lower will Modi-Shah’s BJP stoop. All because the people of Bengal humiliated the duo and chose Mamata Banerjee with an overwhelming mandate,” said Ray in another tweet.