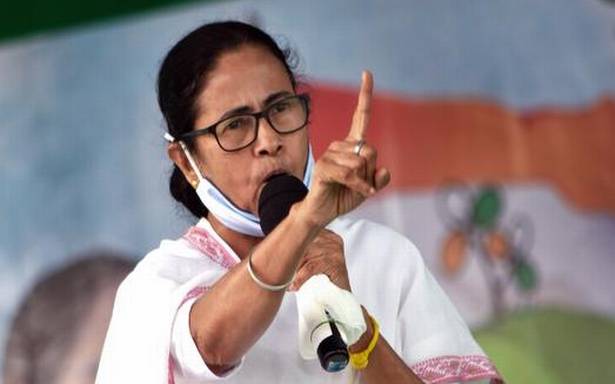 The South 24 Parganas district on Thursday witnessed a clash of the titans with Union Home Minister Amit Shah and Bengal Chief Minister Mamata Banerjee holding public meetings in the district.

Mr. Shah, who launched the party’s fifth ‘Parivartan Yatra’ from the southernmost tip of the State targeted Ms. Banerjee accusing her of ignoring the interest of the people and only thinking of “bhatija kalyan [welfare of the nephew]”. The BJP leadership including Mr. Shah and party president J.P. Nadda have been relentlessly targeting Ms. Banerjee’s nephew Abhishek Banerjee.

Ms. Banerjee, who addressed the rally at Pailan, dared the Home Minister to contest against Mr. Banerjee.

The Home Minister raised the issue of political violence and said 130 BJP supporters have been killed at the hands of the Trinamool Congress.

“If the BJP comes to power, we will assure that those behind the murders are punished. Even if they hide under the earth, we will find them out and put behind bars,” he said.

Earlier in the day, Mr. Shah visited the Sagar island in the Sunderbans archipelago where the Ganga meets the sea. He said Gangasagar mela will be made part of the international tourist circuit. The ‘Namami Gange’ programme for cleaning the river will be implemented in the State. “We will constitute a task force to save lives from cyclones, environmental disasters if voted to power.”

He visited the Bharat Sevashram Sangha in Kolkata and offered tributes to its founder Swami Pranavananda on his 125th birth anniversary.

“The organisation made great efforts to make people aware of freedom. Swami Pranavananda thought of a free India,” he said, adding that Jana Sangh founder Syama Prasad Mookerjee and Swami Pranavananda had shared similar ideologies. He also said Bengal is existing today because of the Jana Sangh founder. “Otherwise, it would have gone to Bangladesh.”