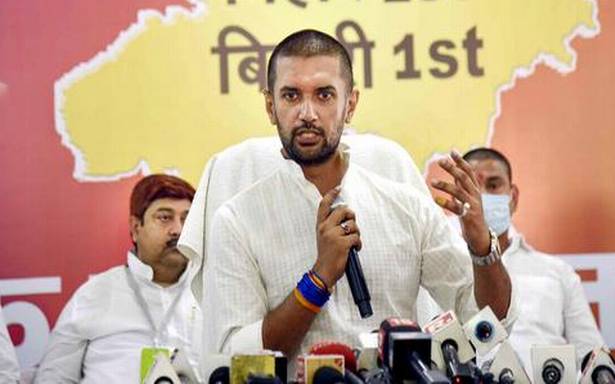 A day after Rameshwar Chaurasia resigned from the Lok Janshakti Party (LJP), as many as 208 leaders and activists quit the party on Thursday and joined the ruling JD(U) in Patna.

They later attacked LJP chief Chirag Paswan for being responsible for the party’s humiliating defeat in the recently concluded State Assembly elections. Those who quit the party included several district presidents and state general secretaries. They joined the JD(U) in the presence of its national president R.C.P. Singh and state president Umesh Singh Kushwaha on Thursday.

On Wednesday, Rameshwar Chaurasia, a former BJP leader and MLA from Nokha, had resigned from the party. Mr. Chaurasia had joined the LJP last year to contest from the Sasaram constituency but had lost the Assembly poll. When asked if he would come back to the BJP, Mr. Chaurasia told reporters that he has not made his plans yet.

Former spokesperson of the LJP Keshav Singh, Dinanath Gandhi, Ramnath Raman and Parasnath Gupta were among those who resigned. Rohtas district president of the party Anil Kumar Singh released a video stating that he had not resigned. “I’m Anil Kumar Singh and three-time LJP district president from Rohtas and was hurt over seeing my name among the party leaders who quit the party today. I’m still with the LJP of Ram Vilas Paswan and Chirag Paswan,” Mr. Singh said in the video.

Ramnath Raman and others attacked party chief Chirag Paswan for being responsible for the party’s failure in the election. “Chirag Paswan was also responsible for holding his ailing father Ram Vilas Paswan captive for three months and there will be any inquiry into it, what I’m saying will come out in public,” Mr. Raman said.

LJP leader Rajkumar Singh from Matihani constituency in Begusarai district was the lone winner from the party in the Assembly election. The party was said to have scuttled the prospects of as many as 35 JD(U) candidates across the State. Despite being a part of the NDA, the LJP had put up party candidates against JD(U) nominees, a move that likely resulted in the JD(U) winning only 43 seats out of 243. JD(U) leaders had openly blamed the LJP for their party’s dismal performance in the poll.