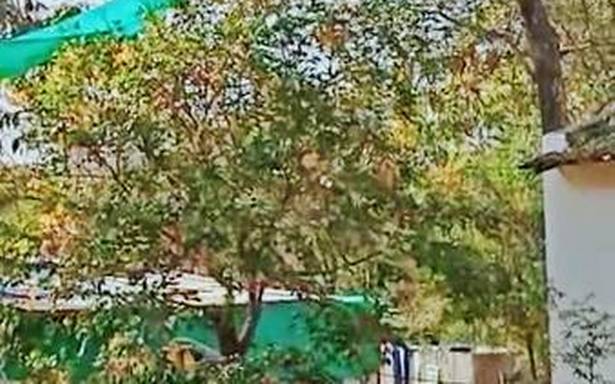 The Forest Department on Sunday arrested the mahout of a temple elephant and his assistant on charges of beating up the animal on the premises of the annual rejuvenation camp for temple and mutt elephants at Thekkampatti, near Mettupalayam.

On Sunday afternoon, a clip recorded on a smartphone showed the mahout Vinil Kumar (45) and his assistant Sivaprasad hitting the legs of the 19-year-old female elephant Jayamalyatha of Andal Temple, Srivilliputhur, with sticks. The elephant was seen trumpeting in pain as the duo repeatedly attacked it for about 20 seconds.

With the clip being widely shared on social media platforms, the HR&CE Department officials confirmed to The Hindu that the Andal temple administration suspended Kumar as per the directions of the HR&CE Department Commissioner S. Prabhakar. A third-generation mahout, he was appointed by the temple as the mahout for Jayamalyatha in 2011. However, Sivaprasad was not appointed by the temple administration and was the mahout’s relative, the officials said.

The HR&CE Department will provide alternative arrangements for the elephant at the earliest and HR&CE Joint Commissioner for Coimbatore Zone R. Senthilvelavan will further investigate into the matter, according to the officials.

Following this, the Forest Department officials said that the duo was picked up from the Thekkampatti camp and booked under sections of the Wildlife Protection Act. According to preliminary investigations, the incident occurred on Saturday evening when the elephant was allegedly not obeying the mahout’s commands. Irked by its insubordinate behaviour, Kumar and Sivaprasad chained the elephant to a tree and attacked it, the officials said.

The video drew sharp criticisms from wildlife conservationists and activists in Coimbatore. S. Chandrasekar, founder of Vanam Trust of India, whose volunteers are claimed to have recorded the video of the incident, said the elephant Jayamalyatha must be shifted from the rejuvenation camp to an elephant camp run by the Forest Department.

President of Nature Conservation Society N.I. Jalaluddin said that various NGOs focussing on wildlife conservation visited the Thekkampatti elephant camp on Sunday and conducted a field inspection on how the elephants are being treated.

Thanthai Periyar Dravidar Kazhagam general secretary K. Ramakrishnan announced a protest near Mettupalayam bus terminus on Monday condemning this incident. In a statement, he demanded that the State government must ensure proper treatment for the injured elephant.

The 13th annual rejuvenation camp for 23 temple and three mutt elephants from Tamil Nadu and Puducherry began on February 8. Organised by the HR&CE Department, the 48-day-long camp will conclude on March 27.