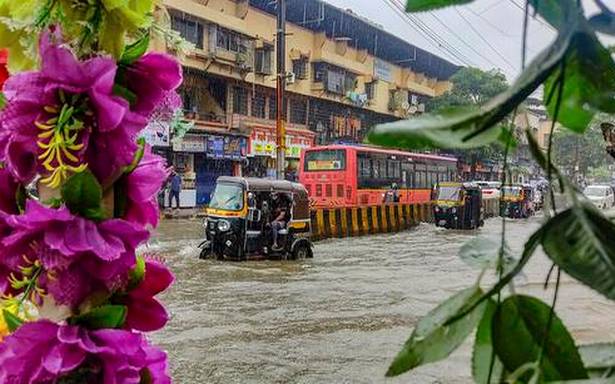 At least six people were swept away by floodwaters in Maharashtra as heavy rain pounded Gondia and Yavatmal districts of Vidarbha and several parts of Marathwada , said authorities.

A group of eight to ten men had gone to bathe in the Bagh River in Gondia’s Amgaon tehsil, when powerful currents swept away four of the group. Two other rain-related deaths were reported from Yavatmal.

Marathwada region is also bearing the brunt of the monsoon’s revival with districts like Parbhani, Nanded, Hingoli and Latur receiving heavy rain on Tuesday.

In Latur, several rivers including the Manjra, the Rena, the Terna and the Tiru are in spate.

The floodwaters have resulted in major damage to the crops, with the sugarcane crop badly affected, said authorities while some villages in Jalkot taluka were cut off.

In Nanded, floodwaters forced closure of the NH 361, with traffic along the route coming to a complete standstill. Heavy showers were also recorded in Bhokar, Naigaon and Umri tehsils.

The India Meteorological Department has indicated heavy rainfall in Sindhudurg in the Konkan in the coming two days.

Meanwhile, in Thane and Palghar the administrations have asked citizens to remain alert following the forecast for heavy rainfall by the Regional Meteorological Centre over the next three days.

Collectors of the two districts, appealed to people not to venture into rivers, lakes and other water bodies in the next few days and also avoid travelling, unless absolutely necessary.

An “orange alert” for the Konkan region, predicting heavy showers till September 9.