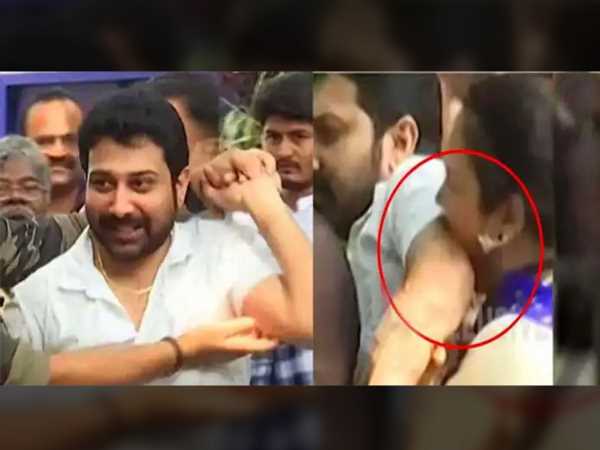 Movie Artists Associations – MAA elections are going on at Jubilee Hills Public School, Hyderabad. Now it is coming out that actress Hema shocked everyone at the polling center. Hema bites actor Siva Balaji and the visuals are going viral on social media.

When a guy entered into the polling booth and started distributing the pamphlets in support of Prakash Raj panel,  Manchu Vishnu’s panel members stopped. In the meantime Hema shocked all by pulling the hand of Siva Balaji and biting him.

Actress revealed the reason why she bit Shiva Balaji’s hand at MAA polling center on Sunday. During the media interaction, Hema said that she bit actor after he stopped her when she was going to prevent an attack on a person.

Siva Balaji reacted on this issue and said that he doesn’t know why the actress bit him at the polling center.  Siva Balaji said that there are certain rules and regulations on the campaigning side and an unidentified guy found on the opposite panel side doing campaigning.  He added, “When I was holding the barricades, Hema was behind me. As the stranger belonged to their panel, Hema tried to prevent me from raising my hand, and in order to do so,  she bit me. I did not observe in which mood she bit my hand.