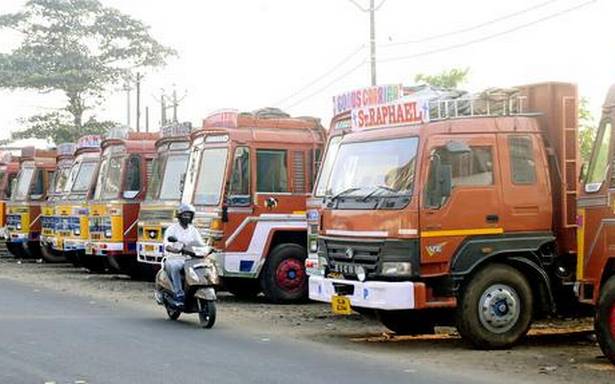 They claim losses due to hike in diesel prices, maintenance charges

Hit by the frequent hike in diesel prices and various maintenance charges, lorry owners across the State are planning to raise the rental amount by 15% to compensate for the losses.

The delay in the consolidation of rental amounts as agreed upon by the State and Union governments has also prompted the segment to independently go ahead with the revision. Though the previously consolidated amount per kilometre for lorry service is ₹60, the actual rent received by majority of the operators is just ₹28, they say. With strong bargaining by traders, the lorry owners are not even in a situation to claim ₹30 a km. It is at a time when autorickshaws charge ₹25 a km in cities, the operators claim.

“The delay in revision of rental charges has troubled many lorry owners who purchased the vehicles as a self-employment option. Many who purchased vehicles using bank loans are now unable to pay back the loans. Some of them have sold their vehicles at cheaper rates to escape from the loan burden,” says Shaju Almana, a functionary of the Lorry Owners Federation.

There are around 17,000 National Permit trucks which connect Kerala with various other States. Apart from this, there are about 5,000 lorries carrying out inter-district services. The State mainly depends on these trucks for the transportation of a major portion of food products. Interstate trucks transport grain from Maharashtra, Tamil Nadu, Karnataka and Andhra Pradesh.

According to various merchant associations in the State, any hike in the rental amount of trucks will have a direct impact on the prices of essential commodities such as rice, fruits and vegetables. The government should make a reasonable intervention to address the lorry operators’ genuine demands and consider more welfare schemes for them, they point out.

At the same time, the lorry owners claim that the revision of the rental amount alone would not result in price hike. According to them, the traders were trying to place the whole blame on the lorry operators.

Another reason that has prompted the lorry operators to consider a hike in rental charges is the scrappage policy announced by the Union government.