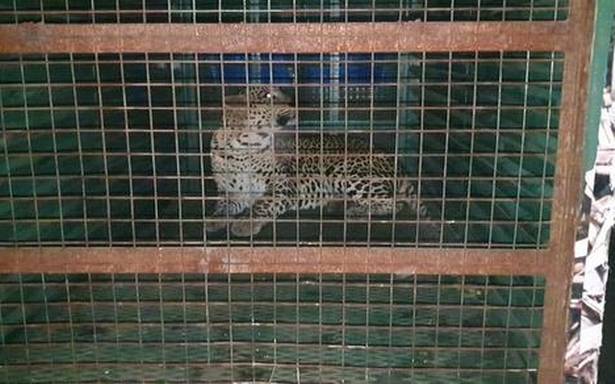 A leopard that had been frequenting villages near Madukkarai in Coimbatore district and preying on the livestock, fell into a trap laid by the Forest Department early on Saturday morning.

The leopard, aged around six, was trapped in a cage placed by the Department at Gandhi Nagar near Madukkarai around 4 a.m. on Saturday.

The carnivore had been frequenting Ayyappan Kovil Street, Vinayagar Kovil Street, Ayyampathy, Tamilannai Street, Gandhi Nagar and a few other residential areas near Madukkarai for about a month. It had killed four goats of a farmer at Gandhi Nagar and attacked the pet dog of a resident of Mattapparai in the early hours of January 20.

According to District Forest Officer D. Venkatesh, permission was obtained from the Chief Wildlife Warden to capture the leopard for translocation. A committee was formed to capture the leopard properly. The committee observed that the leopard has been straying into villages from the Boluvampatti reserve forest area of the Madukkarai forest range. Two traps were placed at Mattapparai and Gandhi Nagar on January 21. The carnivore fell in the trap placed at Gandhi Nagar early on Saturday morning.

Mr. Venkatesh said that the leopard will be released into Thengumarahada forest of the Sathyamangalam Tiger Reserve after a detailed examination by A. Sukumar, Forest Veterinary Officer, Coimbatore Forest Division, on Saturday afternoon.