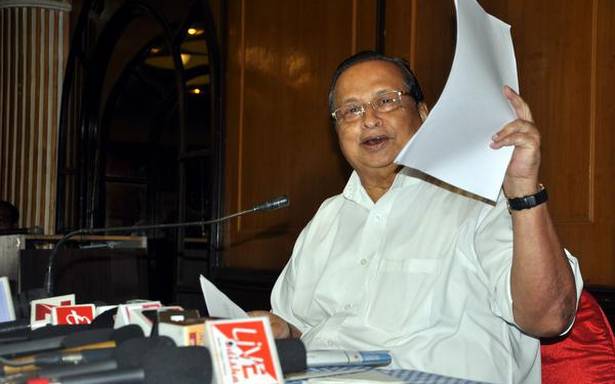 The leadership has surrendered without giving a fight in Pipili bypoll, say cadre

In the recently held Pipili bypoll, Congress candidate Bishwokeshan Harichandan Mohapatra could get 4,261 (2.36%) votes of the 1,80,930 votes polled. For the second time in a row, the party had lost deposit in an Assembly seat.

Before the counting was over on Sunday, disgruntled party workers had started staging a demonstration in front of the party office here. They were demanding the resignation of Odisha Pradesh Congress Committee president Niranjan Patnaik and A. Chella Kumar, Odisha in-charge. They said “the leadership has surrendered without giving a fight”.

As the two crucial panchayat and civic body elections are likely to be held early next year, workers are worried saying the Congress may find it difficult to stay in the memory of the Odisha voters if the party affairs are allowed to run this way.

For the first time in the Assembly elections in 2019, the Congress had slipped to the third position. Its vote share was 16.12% compared to the BJD’s 44.71% and the BJP’s 32.49%. In terms of seats, the national party has single digit representation with nine MLAs in the 147-member House.

The party was expected to take rearguard action and make efforts to recover from the electoral shock. However, it lost three bypolls and in all the three was relegated to the third position.

OPCC president Patnaik was reported to have written to the central leadership expressing his readiness to step down following the result. However, he refused to be quoted on this. Party rebels, however, termed the posturing as an attempt to hoodwink others and said there was a desperate attempt to clinging on to the position.

Pradip Majhi, a prominent tribal leader and working president of the party, was quite candid about the state-of-the-affairs.

“The voters have stopped accepting us as an alternative to the Biju Janata Dal. During the past two decades, we had several opportunities in terms of issues to corner the Naveen Patnaik Government. However, we could not capitalise by taking those issues to their logical conclusion,” said Mr. Majhi.

“During the past one and half decades, there has been no infusion of new blood. Students and youth have lost interest in the party. In fact, we have not been able to inspire them.”

The tribal leader said, “The Congress has to think out of box if it has to remain in electoral landscape. The leadership and the cadre need to work in tandem to bring back the lost glory.”

Congress MLA of Barabati-Cuttack constituency Mohammed Moquim said, “The cadre need to be enthused with electoral successes. We have to keep trying even if all odds are stacked against us. It is extremely important for the country that the Congress, which is the only secular alternative to saffron BJP, remains in the race.”