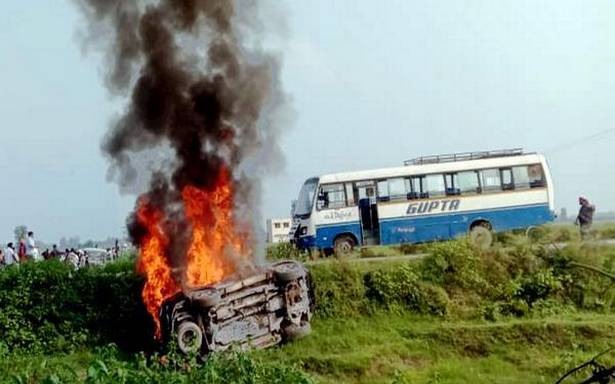 Eight people were killed on Sunday as violence erupted during a farmers’ protest, claiming the lives of farmers and BJP workers.

An FIR has been registered against Union Minister of State for Home Ajay Mishra’s son and several other persons in connection with the Lakhimpur violence that left eight persons dead.

He said as copy of FIR was not available yet, details of the sections on which it was registered were not known.

ADG, Law and Order, Prashant Kumar, who is camping in Lakhimpur told PTI, "I am on the spot. Two FIRs from both sides have been registered in the matter. Detailed information in not available yet as internet is not working here."

"We will let the media know about it soon," he added.

Eight people were killed on Sunday as violence erupted during a farmers’ protest, claiming the lives of farmers and BJP workers ahead of a visit to Lakhimpur by Uttar Pradesh Deputy Chief Minister Keshav Prasad Maurya.

Four of the dead were people in the cars, apparently a part of a convoy of BJP workers who had come to welcome the U.P. minister. They were allegedly thrashed to death.The four others were farmers, officials said.

Farmer leaders had claimed that the minister’s son Ashsish Mishra was in one of the cars which they alleged knocked down some protesters who were opposing the Deputy CM’s visit.

However, Ajay Mishra said he and his son were not present at the spot as alleged by some farmer leaders and he has photo and video evidence to prove it.