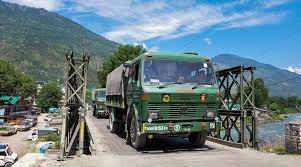 The talks will be held on the Chinese side of the Chushul-Moldo Border Personnel Meeting point. 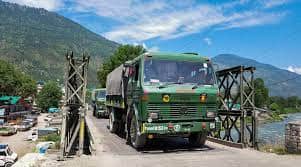 The 13th round of the Corps Commander-level talks between India and China to find a resolution for the 17-month-long standoff in eastern Ladakh will be held on the Chinese side of the Chushul-Moldo Border Personnel Meeting (BPM) point on Sunday.

Lt Gen PGK Menon, Commander of XIV Corps, will lead the Indian delegation, which will also include a diplomatic representative. For China, the delegation will be led by Major Gen Liu Lin, commander of the South Xinjiang Military district.

Just a day ahead of the talks, Army Chief General MM Naravane on Saturday said that China is building infrastructure on its side in the region, which means that it is “here to stay”.

Naravane, speaking at a conclave held by a media house, expressed concerns that with both countries developing infrastructure in the region, for the additional troops and military equipment that were brought in last year, the Line of Actual Control in eastern Ladakh would become like the Line of Control with Pakistan, even though it is not active like the LoC.

He added that India is “keeping a close watch on all those developments”.

If Chinese troops continue to stay there through the second winter, he said, it will “definitely mean that we will be in a kind of LoC situation. He, however, added that it will “not [be] an active LC as is there on the western front”.

“Definitely, we will have to keep a close eye on all their troop buildup and deployments to see that they don’t get into any misadventure once again,” he said.

Both India and China had brought in additional troops and military equipment to the region last year, after the standoff began in May 2020. Both sides have around 50,000 troops each, in the depth areas, and a large number of them had remained deployed through the harsh winter last year.

As Naravane said, senior officials in the defence establishment have been concerned about the military build-up in the region. However, these additional troops and military equipment, including tanks, artillery and air defence assets, can only be sent back to their traditional bases— a process called de-escalation—after disengagement of the friction points is complete.

The Army Chief said that he is not aware why China did what it did last year in eastern Ladakh, but he stated that “whatever it might have been, I don’t think they have been able to achieve any of those aims, because of the rapid response done by the Indian Armed Forces”.

Repeating a recent statement by the Ministry of External Affairs, he said the massive build-up by them “and the non-adherence to various protocols that have been laid down in the past” was “the trigger for all that which happened”.

The standoff, he mentioned, has led the Army to realise that it needs to “do more, as far as ISR is required” which is intelligence, surveillance, reconnaissance, and that has been the “thrust of our modernization over the last one year”.

The last round of Corps Commander-level talks were held on July 31, after which the two sides had disengaged from Patrolling Point (PP) 17A in Gogra Post area. Troops from both the sides had gone back to their traditional bases in the area, and a temporary no-patrol zone was created.

However, China had refused to pull its troops back from PP15 in Hot Springs, where it continues to have a platoon-sized number of its soldiers. PP15 and PP17A were two of the friction points where China had agreed to disengage from in June 2020, but has not completed the pullback of its troops.

The understanding to disengage from PP17A had come after months of a deadlock starting February, when both the sides had pulled back their troops and tanks from the forward locations from the north and south banks of Pangong Tso.

Last year, when the standoff began, Chinese troops had positioned themselves on Finger 4, which is one of the spurs on the north bank of Pangong Tso.

According to India the LAC passes through Finger 8, which is 8 km east of Finger 4. China had also crossed the LAC at PP14 in Galwan Valley, PP15 and PP17A.

The first Corps Commander-level talks were held on June 6, 2020 after which the two sides had come to an understanding to pull back their troops. It was during this pullback that soldiers from both sides clashed in Galwan Valley on June 15, which had left 20 Indian and at least four Chinese soldiers dead after a night of violent, hand-to-hand combat, during which the Chinese troops had reportedly used batons wrapped with barbed wire to attack Indian soldiers. Soon after, the two sides had disengaged from PP14, but not from other friction areas.

As the two sides had reached a stalemate, in late August 2020 India out-manoeuvred China to position its troops on previously unoccupied heights of the Kailash Range in the Chushul sub-sector on the north bank of Pangong Tso.

India’s positions allowed it to not only dominate the strategically sensitive Spanggur Gap, which can be used to launch an offensive—as China had done in 1962— but Indian soldiers also had a direct view of China’s Moldo garrison.

Over the next few days, Indian troops also occupied peaks above the Chinese positions at Finger 4 on the lake’s north bank. It was during this jostling that warning shots were fired by both sides, a first in decades.

That situation remained the same through the harsh winters of Ladakh. A breakthrough was achieved during talks in January, after which both sides pulled back their troops and tanks from the north and south banks of Pangong Tso, which had been just a few hundred meters apart at some locations.

There was no change in the ground situation till August, when PP17A was disengaged.

At the moment, PP15 in Hot Springs is a friction point, but the soldiers are not in an eyeball-to-eyeball situation.

Apart from that, though, Chinese troops have been continuing to block Indian troops from accessing their five traditional patrolling limits in Depsang Plains—at PP10, PP11, PP11A, PP12, PP13. Chinese troops have also disallowed Indian soldiers to move beyond a place known as the Bottleneck, which is around 18 km inside the LAC.

According to top government sources, India had last accessed these patrolling points in January-February 2020.

Depsang Plains is strategically sensitive, because, just like Spanggur Gap, the flat area is a potential launchpad for offensive operations. Additionally, it is just 30 km south of India’s Daulat Beg Oldie base, which is close to the Karakoram Pass in the north.

In Demchok, too, some “so called civilians” have pitched tents on the Indian side of the Charding Nala.