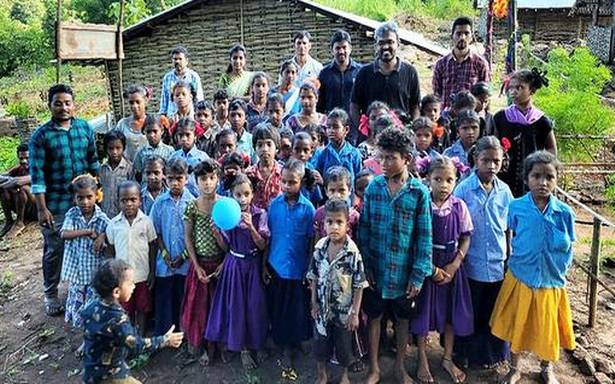 School opened for children of nine habitations in Chintoor Agency

Authorities of the Integrated Tribal Development Agency (ITDA-Chintoor) have set up Konda Badi, a residential school that provides access to primary education for children of the Konda Reddy tribe of nine habitations, on the hills in East Godavari Agency. The Konda Reddy tribe is a Particularly Vulnerable Tribal Group (PVTG) in Andhra Pradesh.

The school was opened at Kutooru Gatti habitation in Kunavaram mandal on Thursday to provide educational facilities to 149 families of the tribe living on the hills. This is the second Konda Badi in the Chintoor Agency. The first school was established at Maamilla Banda habitation last year.

Until now, the Konda Reddy tribal children from the nine habitations used to walk for about one and half hour to reach their school down the hills, and it had led to increase in school dropouts.

“Konda Badi is a residential school. It provides accommodation, food and education for the children, including the Out Of School Children. It offers education from class one to three,” ITDA Chintoor Project Officer A. Venkata Ramana told The Hindu.

On Day One, 30 students enrolled themselves in the school. It has two teachers and each one attends the school every alternate day. The Village Volunteer is the in-charge of the school.

“We will visit every family in the nine habitations with at least 130 to 140 children in the school-going age to persuade them to send their children to the school,” added Mr. Venkata Ramana.

The maximum number of families of a Konda Reddy tribal habitation on the hills does not exceed 25. Given the terrain, running the school is a Herculean task. For the Out Of School children, bridge courses are offered and later they would be admitted to nearby Ashram school to continue their education.