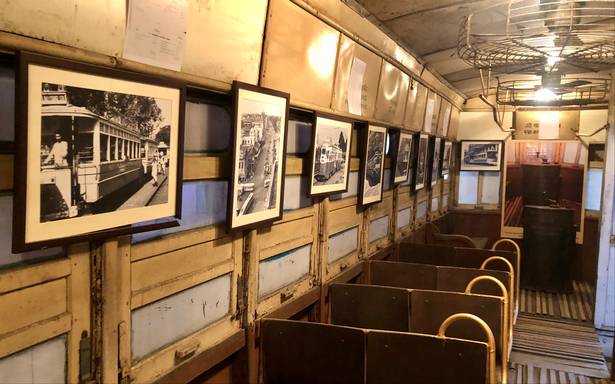 As many as 12 old trams are already on display, with items from bygone era

The concept of converting waste into art has assumed a new meaning in Kolkata with the almost-overnight transformation of a neglected tram depot into a cultural centre that is being planned as a counterpart of Kala Ghoda in Mumbai and the India Habitat Centre in New Delhi.

Until just two months ago, a large portion of the still-in-use Gariahat Tram Depot, right in the heart of the city, served as a dump yard, where as many as 24 trams stood junked and wild growth concealed empty liquor bottles and people urinated.

On December 22, after 41 days of cleaning up, the depot opened to the public as Tram World Kolkata, where, as of now, 12 of the 24 trams are open for display, their interiors exhibiting items and pictures from a bygone era, and which will soon develop into a full-fledged cultural centre. The interiors of the trams have been kept as original as possible, giving visitors the feel of a time machine.

“Kolkata does not have a Kala Ghoda or an India Habitat Centre; it has Nandan, but that’s film-centric. This place will be the Kala Ghoda of Kolkata. It will have a food court; it will have craft shops — there will be stalls selling patachitra, dokra art and Darjeeling tea; and there will be space for literature festivals and art exhibitions,” West Bengal Transport Corporation managing director Rajanvir Singh Kapur, the brain behind the transformation, told The Hindu.

According to Mr. Kapur, Tram World Kolkata will become fully functional as a cultural centre by mid-March.

Irrespective of what the depot eventually transforms into, this WBTC project has already achieved two important purposes: prevent prime land from eventually turning into real estate and save 24 out-of-use trams from landing in the hands of scrap dealers and preserve them for posterity.

Kolkata, the capital of British India until 1911, has been notorious for its neglect of heritage and it is only in recent years that awareness has been growing about preserving the past. The tram — which has regained importance as a mode of transport in the developed world, considering it is economical and non-polluting — has seen a rapid and steady decline in Kolkata, the only city in India where it still runs. However, the last few months have seen some public-friendly projects come up around trams, such as a mobile library.

After an experimental run in the early 1870s, the tram was formally introduced in Kolkata in 1880 with the setting up of Calcutta Tramways Company. During the peak of its popularity as a mode of transport, in the 1960s, there were as many as 52 tram routes in Kolkata. By 2016, the number had declined to 12, and since 2019, only six routes have been functional.

Mr. Kapur, who took charge in January 2020, said the WBTC had concrete plans to renew interest of the public, particularly the youth, in this gentle and non-polluting mode of transport, but did not wish to reveal them at the moment. In the absence of a strong political will, however, the iconic Kolkata tram is certain to trundle its way into history. Tram World Kolkata, considering it is a State government initiative, shows that a bit of imagination can slow down — if not halt — that journey.