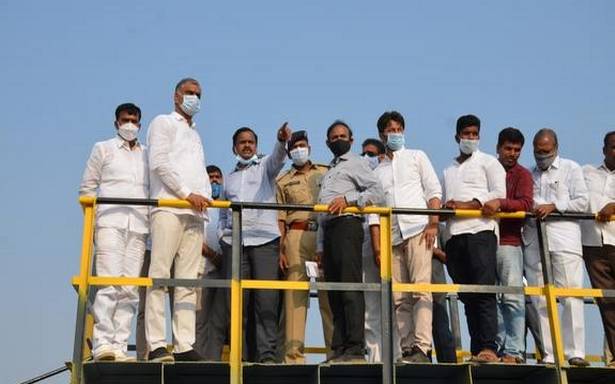 Chief Minister K. Chandrasekhar Rao will be visiting Gajwel constituency on Tuesday and participate in various development programmes, including release of Godavari water to Haldi Vagu through Sangareddy canal. He will also release water to Gajwel canal at Pamulaparthy. Finance Minister T. Harish Rao on Monday supervised the arrangements for the Chief Minister’s visit.

The new direction of flow of Godavari water would change the destiny of farmers in the region, the Minister remarked.

“This is a historical movement for Gajwel, 1600 cusecs water will be released to Haldi Vagu. It will reach Haldi Vagu and Nizamsagar in about eight to 10 days filling about 32 check dams enroute. The check dams will store 0.62 tmcft water. Standing crops will be saved in 14,268 acres by releasing this water. The programme is being organised in low scale in view of the prevailing COVID-19 conditions though we planned to organise a grand event in the presence of many farmers,” said Mr. Harish Rao thanking farmers for sacrifice they made to bring Godavari water to Gajwel. He has also thanked Chief Minister on behalf of farmers for releasing water to save standing crops.