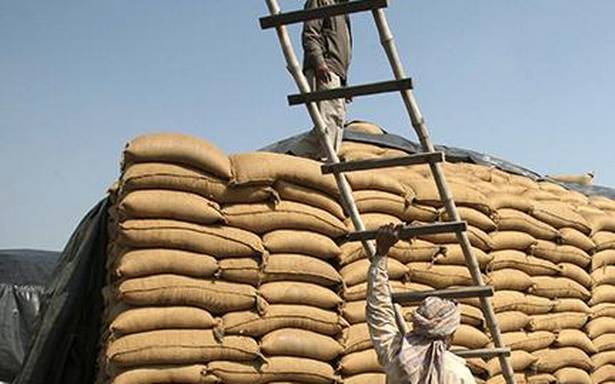 Recent orders from the Food Corporation of India have led to a new flashpoint in the ongoing farmers protests, with farm unions warning that the Centre’s insistence on direct payment and tenancy documentation could derail the crop procurement process.

On Monday, farm unions affiliated to the Samyukt Kisan Morcha protested outside the FCI offices in Punjab and Haryana, as well as some locations in other States such as Andhra Pradesh, Uttar Pradesh and Rajasthan. Declaring it as FCI Bachao Divas (or Save FCI Day), farmers demanded an immediate withdrawal of the recent orders.

“The government should roll back the provision of direct payment to the bank account. Implementing it in haste can lead to many complex problems that will exclude so many farmers from getting their price of the crop,” said an SKM letter to the Ministry of Food and Consumer Affairs. The FCI has insisted that direct payment to farmers’ bank accounts, bypassing the powerful arhatiyas or commission agents, will lead to greater transparency and accountability. Since arhatiyas play a key role in the Punjab and Haryana farm ecosystem by providing farm loans, the move has been opposed by a large section of farmers, as well as the Punjab government.

Another FCI order stipulates that tenant farmers and sharecroppers must produce a jamabandhi, or legal agreement proving that they have the right to till leased land, in order to get paid for procured crops. Thousands of sharecroppers do not have such agreements and will be hit hard by this move. SKM is demanding that this order be withdrawn as well.

The FCI’s proposals to tighten quality requirements for wheat and paddy procurement from the next marketing season are also being opposed.

At a broader level, farmers connected their issues with the FCI with their existing demands to repeal the farm laws and enact a legal guarantee for procurement of all crops and minimum support prices.

“The Acts will increase control of the private sector in food grains storage, cold storage, food processing and marketing,” said the All India Kisan Sabha, in a letter addressed to the Prime Minister.

“Ultimately the government plans to wind up subsidised food distribution under [the Public Distribution System] and reduce it to a cash transfer scheme under pressure from the [World Trade Organisation] and imperialist countries like the U.S.A. It also plans to sell off the FCI warehouses to the private sector to pay off the debts,” it added, accusing the Centre of reducing the FCI’s budget and procurement centres in recent years.