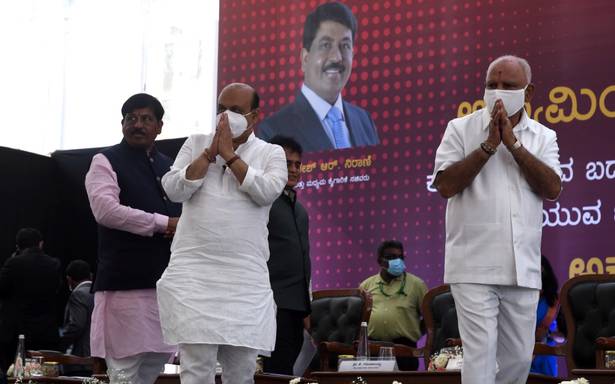 Chief Minister Basavaraj Bommai said that the Karnataka Government will come out with an employment policy for providing incentives to industries and entrepreneurs who provide the maximum number of jobs. Karnataka would also formulate an R&D policy to promote research and development across all sectors of the economy.

After inaugurating a workshop on ‘Udyami Aagu, Udyoga Needu’ (Be an entrepreneur, become an employer) and Kaigarika (industrial) Adalat at the Palace Grounds in Bengaluru on October 11, the Chief Minister said, “The need of the hour is to provide jobs. Whoever gives more jobs, maximum incentives will be given to them under the (proposed) new employment policy.”

The programme, organised by Department of Industries and Commerce, aims to encourage professional youth and students totake up entrepreneurship and employment generation.

Mr. Bommai told students that money alone was not enough. “It is through hard work that one can become an entrepreneur. Consciousness of time and hard work are the hallmarks of an entrepreneur,” he said.

The Chief Minister said a synergy between academia and industry needs to be achieved for conducive growth of industries and the job market. Many incentives were being provided to entrepreneurs under the Industrial Policy (2020-25), he said.

Section 109 of Karnataka Land Reforms Act, 1961, had been amended for acquisition of farm land for industrial purposes. The start-up policy, semiconductor policy and other policies have transformed Karnataka into an industry-friendly State. The government has provided ₹50 lakh grant-in-aid each for many start-ups in Bengaluru, and in tier II and III cities. Skilled training would be provided to 75,000 candidates belonging to scheduled castes and tribes, and women graduates, he said. The Industries Department has been holding skill training programmes in various sectors and offering career guidance.

Mr. Nirani said that students passing out of colleges do not have adequate skills required for industry. The academic curriculum of technical courses needs to be changed to create entrepreneurs among the young. The workshop will provide an opportunity to meet and interact with successful business leaders and entrepreneurs.

The Kaigarika Adalat would be held on October 12 to address grievances of industrialists.