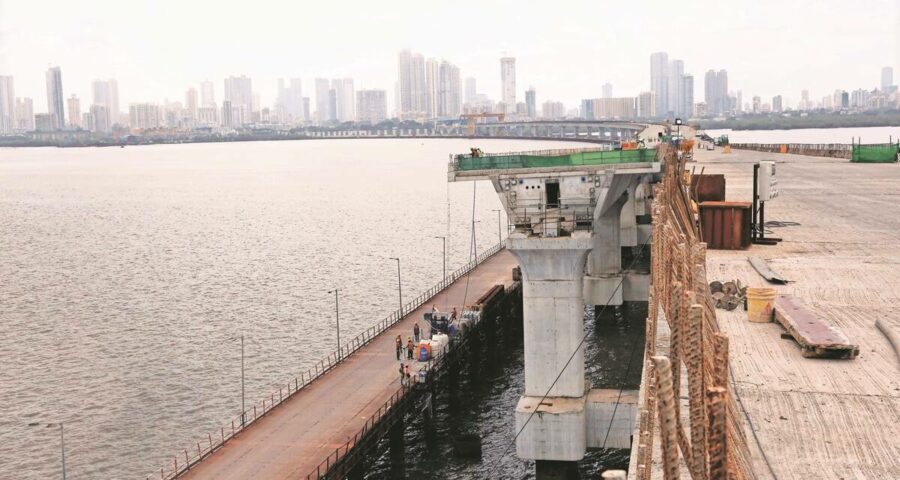 After a 60-year-wait, a project to connect the island city of Mumbai with the mainland is taking shape. The Mumbai Trans Harbour Link, which will be India’s longest sea bridge, is expected to be completed by 2023. 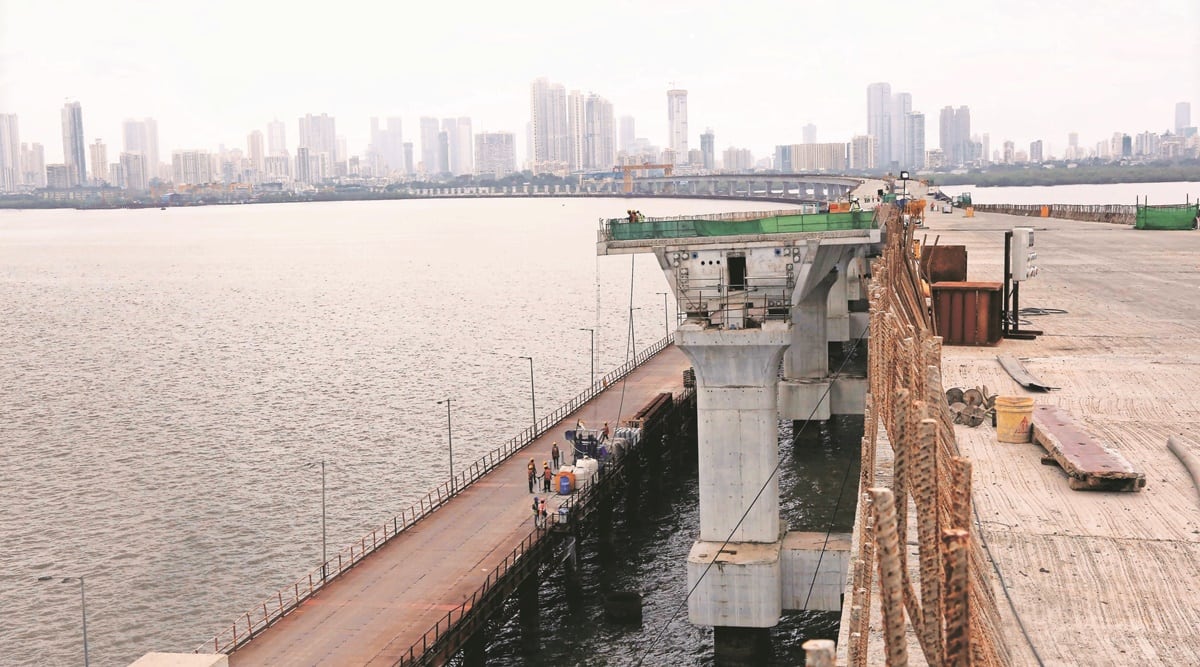 Nearly 7,500 workers and engineers are working day and night to help end Mumbai’s 60-year wait for a connector that will allow commuters to breeze across Thane Creek into Navi Mumbai.

The Mumbai Trans Harbour Link (MTHL) — a colossal sea bridge that will connect the Island City to Navi Mumbai and parts of Raigad district — is finally beginning to rise one concrete segment at a time over one of the most spacious stretches of Thane Creek.

History of the project

The idea of a connector linking the Island City of Mumbai to the mainland was first proposed in 1962 in a study titled “Planning of Road System for Mumbai Metropolitan Region”. The idea was to set up infrastructure that would help in the greater economic integration of Mumbai island with Navi Mumbai and extended regions of Pune, Goa, Panvel and Alibaug.

It took the Maharashtra government close to 34 years to initiate a feasibility report of the project, which was done in 1994. The project was stuck in bureaucratic files for another decade before the study was updated in 2004 and tenders called in 2006.

Corporate rivalry, litigation and the state’s hesitancy in pushing the project — which was expected to see 50,000 vehicles using the bridge from both ends — led to the project going into a deep freeze for another decade.

In 2017 the project was revived with the Mumbai Metropolitan Region Development Authority (MMRDA) – the nodal agency for constructing the project — signing an agreement with Japan International Cooperation Agency, which is providing development loan assistance for the Rs 18,000 crore project. Work on the project began in April 2018, and it is expected to be completed by mid-2023. 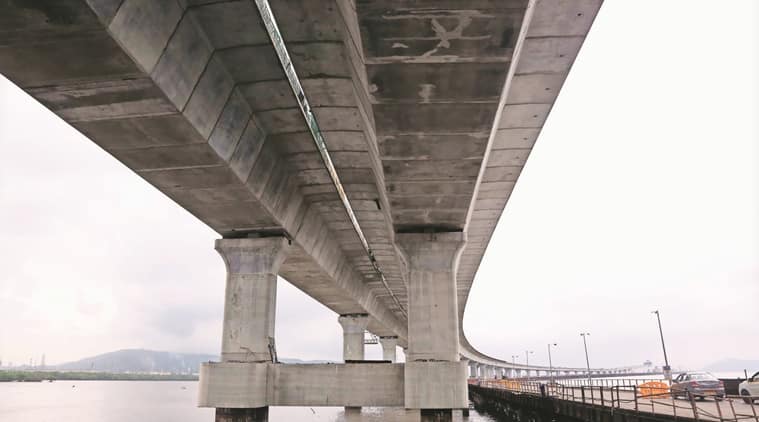 Size of the project

The MTHL is a 21.8-km-long bridge, which will be India’s longest sea bridge, connecting Sewri in Mumbai to Chirle in Navi Mumbai. It will have six lanes, each 3.5 metres wide. A 16.11 km stretch of the bridge will be built on water.

The MMRDA is also conducting a feasibility test on whether the metro and a dedicated bus corridor can run on the sea link, which will enable public transportation apart from private vehicle transportation.

For ease of work and to ensure faster completion, the project has been divided into a number of packages, with work being initiated on all packages simultaneously. 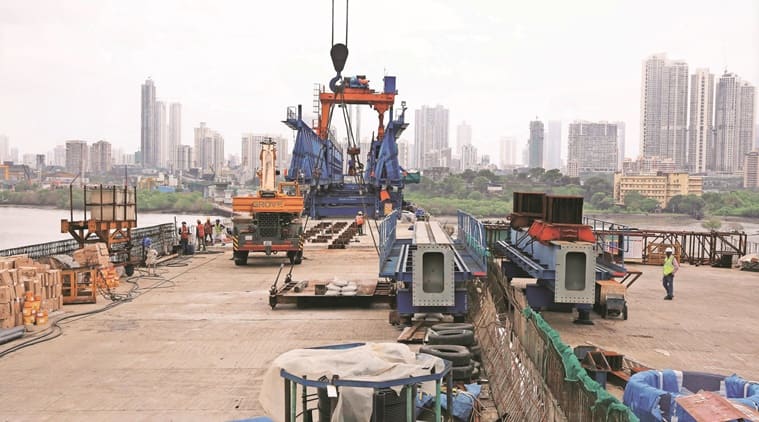 How the mid-sea segments are being constructed

The most difficult and arduous part is the construction of the segments of the project that lie in the marine portion. The fact that the bridge lies close to sensitive establishments like ONGC, JNPT and BARC makes the construction of these segments more difficult, with engineers having to take care that they do not damage any underwater installations like pipelines or communication cables.

To hold the massive weight of the bridge, the engineers have to dig strong foundations which at certain areas are at a depth of 47 metres.

These foundations support over 1,300 hollow piers, which on an average have a height of 26 metres. It is these piers that hold up the massive girders, which eventually end up supporting the precast deck of the bridge. These precast segments are put in place to make the top part of the bridge by gantry machines.

“For every foundation we have to identify how deep the bottom of the sea is. We stop excavating only when we get to the hard rock bed of the sea, after which we do the piling work. Depending upon the height the piles are launched. This is the most crucial task as this is the base of the whole bridge,” an official involved with the construction said.

Challenges of working in the sea

The most challenging work is that which takes place in the sea, with a team of workers and engineers having to take an hour-long boat ride every day to their work site.

Workers on the sea work 24 hours a day in three separate batches, with fresh hands being rotated in an eight-hour cycle.

Workers say that fickle weather and gusty winds are the biggest challenges they face. “We are continuously tracking weather reports to know when it is going to rain or how windy it will be for the coming weeks. We plan our work based on these weather reports. The tide also plays a huge role in the kind of work that we can do,” an official said.

“Even the daily work is planned according to the timing of low and high tide. Everything is dependent on the tides such as the timing of transporting boats,” said an executive person on the site.

During cyclones, which hit the western coast in the last one and a half years, the vessels of the construction site in the sea had to be maintained and locked.

Officials say that nearly 45 per cent of the work has been completed. They say that the pandemic-induced lockdown has affected construction to some extent, but they are hopeful of adhering to the 2023 deadline.

“The project is extremely challenging in terms of technology, methodology, location, sheer size, besides complexity. It will stand out as an engine of economic growth and an engineering marvel. There are many first-of-its-kind methods and machinery that have been used for this project. I am sure it will be in the service of people in a very short span of time,” MMRDA Commissioner S V R Srinivas said.