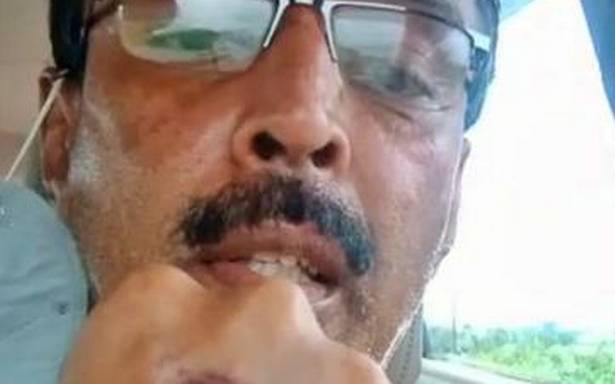 In an unusual development, authorities in Karnataka stamped seal on the bodies of four farmers from Wayanad who crossed the interstate Bavali checkpost on Thursday to visit their ginger farms there.

“The officials stamped on my right hand even after I showed proof of two doses of vaccination and a recent RT-PCR test report at the checkpost,” P. Hussain of Padinharethara said on Friday. He has been cultivating ginger on leased land at Hegde Devan Kotta in Karnataka for many years.

“The incident literally shook me,” Mr. Hussain said adding the stance of the officials was against the directive of the Central government. The ink used for the purpose was similar to that used during elections, he said.

The exercise with the dated seal was made citing the seven-day quarantine being imposed by Karnataka for travellers from Kerala to contain COVID-19.

Meanwhile, O.R. Kelu, MLA, wrote a letter to Chief Minister Pinarayi Vijayan seeking his intervention in the issue. Hundreds of people, including farmers, from Kerala crossed the border everyday for various purposes adhering to the restrictions imposed by the Karnataka government. But these kinds of incidents were not suited for a civilised society and it was violation of human rights, he added.

However, Wayanad Collector Adeela Abdulla said she discussed the issue with Bagadi Gautham, her counterpart in Mysuru district, and the latter instructed the officials at the Baveli checkpost to stop the practice. But the travellers should undergo mandatory quarantine, she said.