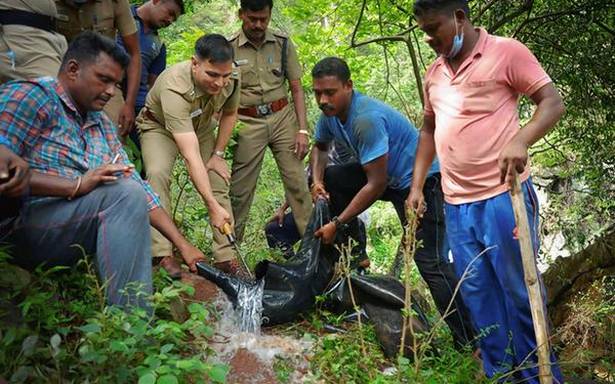 A few villages in the hills have become a hotbed of arrack-brewing, say the police, who have spread their presence across remote hamlets and the forest fringes. But the brewing has been thriving as arrack is a cheap substitute for Indian Made Foreign Liquor for many residents, who have few job opportunities.

Easy availability of water from rivulets in the forests, firewood and other raw materials has made distillation a flourishing business. Bootleggers purchase jaggery, a key ingredient, from shops at the foothills and in neighbouring taluks, the police said.

The arrack is sold in plastic pouches, each costing ₹50. Most of the contraband is smuggled to the neighbouring districts, the police said.

“Though we have been cracking the whip on illicit distillation, the locals themselves protect the bootleggers,” Superintendent of Police Ziaul Haque told The Hindu.

The hills comprise about 40 villages and 93 hamlets. Mr. Haque said the illegal breweries have been functioning deep inside the hills. “We find it tough to access these locations because of the unfamiliar terrain and the lack of motorable roads. Now, we have decided to use drones to locate the arrack dens. The Police Department has prepared a proposal to buy two drones for the Kariyalur station located in the hills.”

The use of drones has already paid off: on Friday, over 3,400 litres of fermented wash and 410 litres of arrack were seized during a raid in the hills.

As many as 769 cases have been booked for brewing and smuggling of arrack; 18,103 litres of arrack, 3,30,563 litres of fermented wash and 1,865 litres of rectified spirit have been seized so far.

The police have also drawn up a rehabilitation plan for about 100 former and repeat offenders.