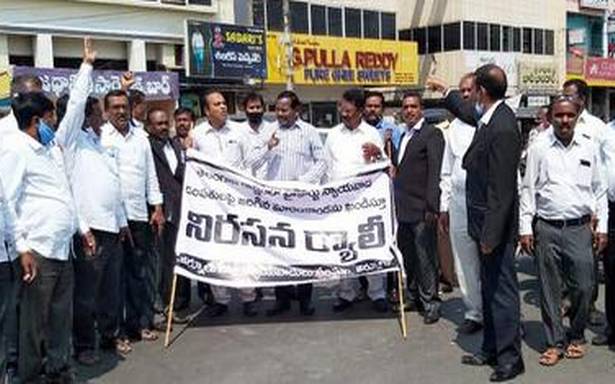 ‘Case should be tried under supervision of TS High Court’

Members of the Kurnool District Bar Association on Thursday took out a rally from the District Courts Complex in protest against the brutal murder of advocate couple—Vananarao and Nagamani—in the Peddapalli district of Telangana.

The association members also staged a rasta roko near Rajavihar Junction in the afternoon. Kurnool District Bar Association president Y. Jayaraju condemned the incident and demanded that a law be made to provide protection to advocates.

“The murder case should be tried in a special court and the perpetrators should be brought to justice within six months. It is time the Bar Council of India and State Bar Council laid focus on the security of advocates, overcoming the political and ideological differences,” said Mr. Jayaraju. who is also the president of the Andhra Pradesh SC, ST Lawyers Forum.

He also wanted the investigation and trial of the case be done under the direct supervision of the Telangana High Court.