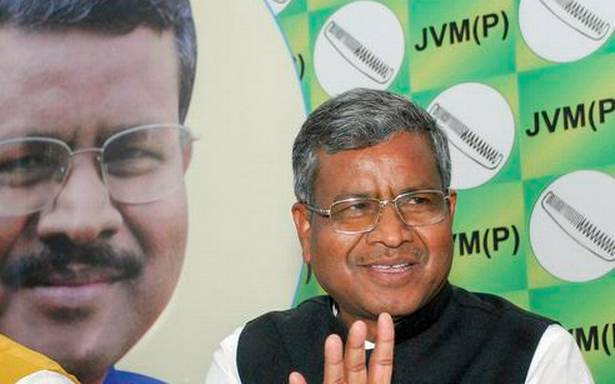 Almost seven months after the Babulal Marandi-led Jharkhand Vikas Morcha (Prajatantrik) merged with the BJP in February this year, the Jharkhand Assembly Speaker Rabindra Nath Mahato is yet taken any decision on granting status of Leader of Opposition (LoP) to him under Anti-defection law pertaining to 10th schedule of the Constitution. For the last six months, the Jharkhand Assembly has not had an LoP.

Mr. Marandi who had been a member of the BJP, was the first chief minister Jharkhand after its bifurcation from Bihar in November 2000. Later, he parted ways with the BJP to form the JVM (P).

Earlier, after the merger, the BJP had declared Mr. Marandi as LoP in the State Assembly and chief of the BJP legislature party. However, Speaker Mahato took suo motu cognizance of the decision and the revolt of two JVM(P) MLAs — Pradeep Yadav and Bandhu Tirkey — against it, and initiated proceedings against Mr. Marandi’s membership. Mr. Marandi later challenged the Speaker’s decision in the Ranchi High Court.

Last week, on August 24, the Speaker heard the case virtually due to the COVID pandemic. Pleading his case, Mr Marandi’s counsel, R.N. Sahay said the Speaker’s court has no power to hear the case as the Election Commission of India has also ruled in favour of Mr. Marandi. Mr. Sahay also pleaded that since the case was already pending in the High Court, it would not be appropriate for the Speaker’s court to hear the case. The Speaker wait for the High Court’s judgment in this case, he said.

Mr. Sahay also said the merger of the JVM(P) with BJP was made after the expulsion of two party MLAs Pradeep Yadav and Bandhu Tirkey for anti-party activities.

Former Dhanwar MLA Raj Kumar Yadav, who is also one of the petitioners in the case, meanwhile, said Mr. Marandi had contested the 2019 Assembly election on JVM(P) ticket but later merged his party with BJP which was “against the mandate”.

While speaking to The Hindu, senior BJP leader and chief whip of the party in State Assembly Biranchi Narayan said “the party will wait for the Speaker’s decision and the High Court’s judgment regarding this. What else we can do?”.