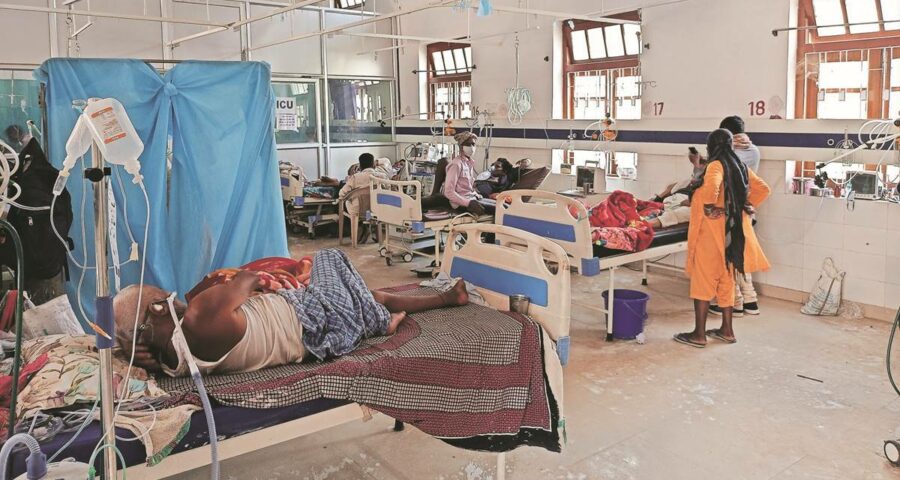 All three are attending to 62-year-old Ravindra Sinha, who is suffering from Covid-19, and has been on a ventilator at the hospital for the last three days. Inside the Intensive Care Unit (ICU) of Hazaribagh Medical College and Hospital (HMCH), 58-year-old Mala Sinha is massaging her husband’s leg. Above his double mask, the eyes of her nephew Ankit are fixed on the oxygen monitor, while another nephew is standing by to help — should it be needed.

All three are attending to 62-year-old Ravindra Sinha, who is suffering from Covid-19, and has been on a ventilator at the hospital for the last three days.

Almost every patient in the 12-bed ICU located in the old building of HMCH has three attendants.

They say the supply of oxygen has been unpredictable, its pressure drops randomly and without warning so the meter has to be watched constantly — and, when that happens, they have to immediately rush for help.

“This is a constant problem. The oxygen level will suddenly fall, and I have to run to the (oxygen) supply room, where I have to scream and cry until someone comes out. Things have got worse in the last two days,” Ankit said.

According to patients’ relatives, the problem with the oxygen supply is due to leakage in the manifold system, by which several cylinders are joined to one pipeline, which distributes the gas to beds in the ward.

Sources in the hospital said there has been an “issue with one port” of the manifold system since Sunday. However, HMCH Medical Superintendent Dr Vinod Kumar said he was unaware of any leakage in the system.

The problem appeared to have been fixed on Monday evening after Hazaribagh Deputy Commissioner Aditya Kumar Anand visited the hospital. “We got to know that there was leakage in the manifold system which was rectified late evening. These are technical things and I can’t commit there won’t be another leakage…In this manifold there are eight cylinders and even if four cylinders are used, it does not mean that the oxygen supply will stop. However, the pressure will be reduced to an extent… Whether that pressure will be sufficient or not, will be decided by the doctor,” Anand said.

Hazaribagh is the third highest caseload district in Jharkhand, with 2,653 active cases as on May 16. According to Medical Superintendent Kumar, HMCH has 90 oxygen beds and around 15 ventilators. There is no oxygen plant in the vicinity, and medical oxygen is supplied through individual cylinders and the manifold pipeline.

Ironically, more than 10 oxygen concentrators have been lying unused in a room at HMCH. MS Kumar said: “Patients don’t want to use them, and there is no point.”

The hospital has a shortage of skilled staff, Kumar said. “We have around 60 doctors who go on rounds, but only people from the Medicine Department and anaesthetists can handle ventilators. We need three ICU in-charges, but we have only one, and he cannot be present at all times.” he said.