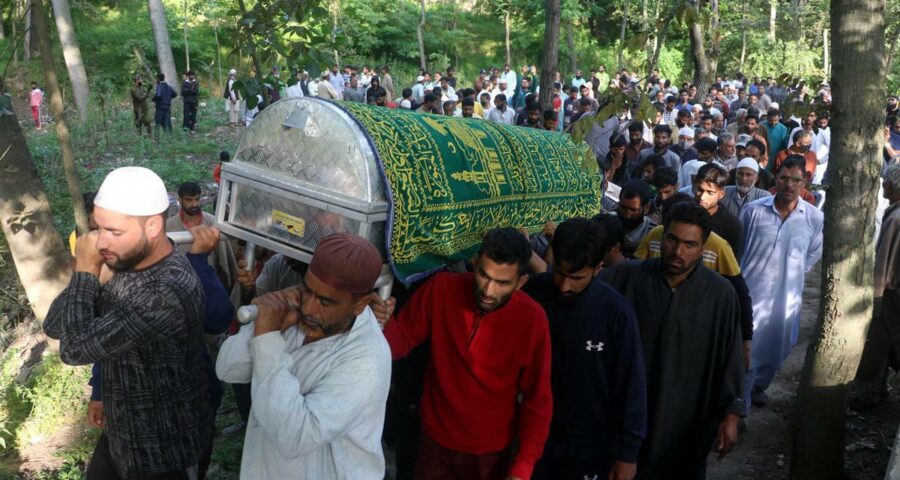 In a statement on Monday, J&K Police said, “Preliminary investigation revealed that two terrorists of proscribed terror outfit JeM, one suspected to be a foreigner & another local terrorist, are involved in this attack.” A little after 10.30 pm on Sunday, as Fayaz Ahmad, a Special Police Officer (SPO) with the J&K Police, and his family were preparing to retire for the night, they heard a knock on the door.

“Just as he stepped out, a gunshot rang out,” Fayaz’s daughter-in-law Rukaiya Liyaqat told The Indian Express. Minutes later, three members of the family — Fayaz, his wife and daughter — lay in pools of blood outside their house at Hariparigam village of Tral in South Kashmir’s Pulwama district.

While 48-year-old Fayaz died on the spot, his wife Raja Begum died at the Government Hospital at Bijbehara while his 23-year-old daughter Rafia, who was rushed to a hospital in Srinagar, died on Monday morning.

In a statement on Monday, J&K Police said, “Preliminary investigation revealed that two terrorists of proscribed terror outfit JeM, one suspected to be a foreigner & another local terrorist, are involved in this attack.”

IGP Kashmir Vijay Kumar, who visited the family on Monday, too held the Jaish-e-Mohammad responsible for the killings — the latest in a spate of attacks in J&K since political activity gained pace amid the Centre’s outreach to the mainstream political leadership.

Over the last few days, a J&K Police constable, a sub-inspector, and a civilian have been killed in attacks at different locations in the Valley. On Sunday, two bombs were dropped on the Indian Air Force station in Jammu. A day earlier, a civilian succumbed to injuries after a grenade attack in Srinagar.

Rukaiya and her year-old daughter are the only survivors of Sunday’s attack. Her husband, who works as a non-commissioned soldier with the army, was not home and Rukaiya says she was on the phone with him when she heard the first gunshot.

“My mother-in-law ran out and threw herself on to my father-in-law to shield him but the two attackers shot them again. Rafia also ran out and she was shot,” Rukaiya said.

Fayaz’s niece Sameena, who was among the group of mourners at the house on Monday, said through tears, “My uncle was only an SPO. He worked all these years, but why they target him now?”

J&K Lieutenant Governor Manoj Sinha condemned the attack on the SPO and his family, calling it “an act of cowardice” and said the “perpetrators of violence will be brought to justice very soon. My deepest condolences to the family of martyr & prayers for the recovery of injured”.

“An entire family fell to bullets. No respite from these thugs of violence. May they rest in peace. May the family muster courage to bear this loss,” Lone said on Twitter.