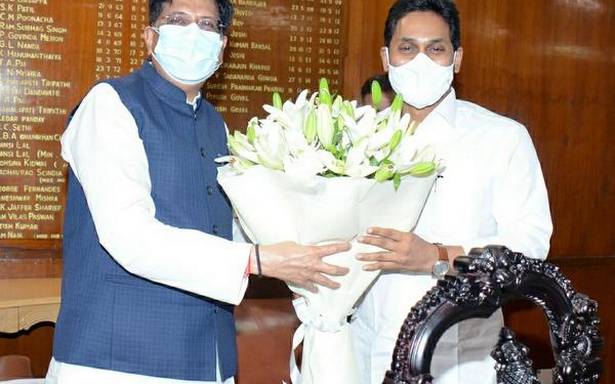 The Andhra CM met with Central Ministers in New Delhi

Mr. Jagan Mohan Reddy had called on Union Home Minister Amit Shah and Vice Chairman of Niti Aayog Rajiv Kumar on Thursday, in which the Chief Minister had discussed several key issues, including the decision to decentralise administration by having three Capitals in the State.

During the meeting with Mr. Pradhan, the CM raised the issues relating to petro complex at Kakinada and Visakhapatnam Steel Plant. Mr. Jagan Mohan Reddy reminded that establishment of a petro complex at Kakinada was one of the items in the AP Reorganisation Act- 2014 and a DPR of the complex was made by HPCL and GAIL with a capacity of one million metric tonnes costing ₹32,900 crore. The Centre had asked the State to provide ₹975 crore for a period of 15 years as part of viability gap funding.

"At this stage, our State government would not be able to bear such huge costs and we have nominated members for the working group of the State Government. We urge the Union Minister to initiate discussions on the project . Since the Centre had decreased corporate tax by 25% and the interest rates have fallen all over the world, the project can be initiated without viability gap funding,’’ said Mr. Jagan Mohan Reddy.

Mr. Pradhan assured that the Centre would establish the petro complex in the State and responded positively to the appeal made by the CM relating to viability gap funding. The Minister also said that he would arrange a meeting of secretaries in the coming week and finalise the guidelines.

The Chief Minister also raised the issue of privatization of Visakhapatnam Steel Plant as over 20,000 employees are depending on it. More than 30 people have lost their lives during the agitation for VisakhapatnamSteel Plant and during 2002-2015, the Steel Plant had shown a remarkable progress. The Steel Plant is spread over 19,700 acres and the land is valued more than ₹1 lakh crore.

However, since the year 2014, there was a drop in the revenue as the management borrowed huge sums of money for expansion, a down turn in global steel industry and lack of captive mines have caused a steep decline in the fortunes of the steel plant.

"Due to these reasons, the Visakhapatnam Steel Plant with a actual capacity of 7.3 million metric tonnes is working with current capacity of 6.3 million metric tonnes but since December 2020, it is earring profits upto ₹200 crore per month. The steel plant is also buying raw material from NMDC at ₹5,260 per tonne thus incurring an additional cost of ₹3,472 crore. Hence we request that the captive mines in Odisha state should be allotted to VSP. I also urge the Minister to convert the huge loans into equity and provide an opportunity for the Steel Plant to be listed in Stock Exchange,’’ said Mr. Jagan Mohan Reddy.