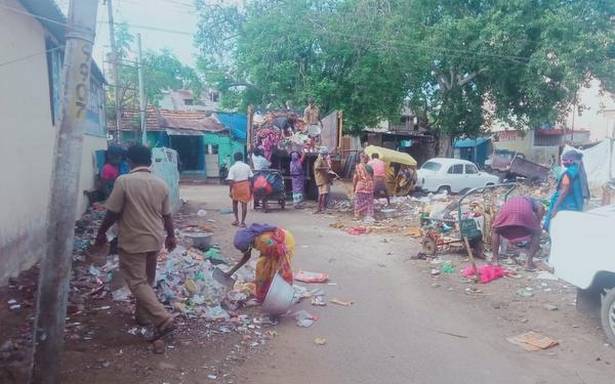 The Tiruchi City Corporation on Thursday kicked off a mass cleaning drive to clean up solid waste dumped in public places. Four wards within the city limits have been identified, where the mass cleaning will be enforced.

The Minister for Municipal Administration, Urban and Water Supply, K.N. Nehru had instructed the officials of the civic body to conduct a cleaning drive at some road corners and junctions of arterial roads in ward number 57, 58, 59, and 60. The people residing in these wards had met the Minister and expressed their grievances about waste management and garbage collection in the area.

He instructed the officials to organise a one-time mass cleaning, including the removal of debris, construction waste, desilting of stormwater drains, and clearance of garbage from empty plots and public areas.

"We have diverted staff from other wards to ensure that the work is done in the four wards within a couple of days," S. Sivasubramanian, Corporation Commissioner, said.

The public will also be instructed to ensure clean surroundings and avoiding public dumping of waste.

"During the cleanliness drive, sanitary workers will also instruct residents to refrain from dumping the waste in public spaces, and instead hand it over to the garbage collectors who will visit their homes every day," he said.