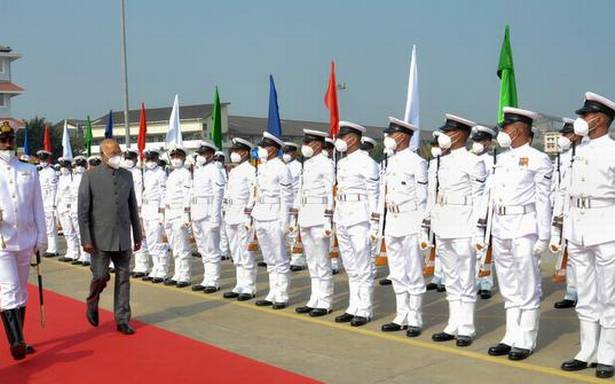 A boat was ‘hijacked’ on the Kochi backwaters on Wednesday morning, leaving it to the Indian Navy’s elite marine commandos to do the rescue act.

Only that it was part of an operations demo conducted at the Southern Naval Command in honour of the President and the Supreme Commander of Defence Forces, Ram Nath Kovind, who watched the show along with his wife, Savita Kovind.

The simulation of the Visit, Board, Search and Seize operation saw the armed marine commandos chasing down the ‘hijacked’ vessel in two Gemini boats with the aerial support of a Chetak helicopter.

Earlier, the demonstration got off to a high-octane start with five Gemini boats carrying machine gun-wielding marine commandos steaming across the backwaters in an arrow head formation firing saffron flares in honour of the President.

This was followed by a fly-past demo, initially by three Chetak helicopters and followed by two Advance Light Helicopters (ALH), Dhruv, manufactured by HAL and described as the backbone of the Make in India initiative of the Indian aviation industry. Three Seaking advanced anti-submarine warfare helicopters then flew past, followed by three Dornier medium range maritime surveillance aircraft, which are hailed as the workhorses of the Indian Navy.

Excitement hit another notch as a helicopter approached a moving INS Sharada, another offshore patrol vessel, for the demonstration of landing on the narrow deck of a moving vessel. The helicopter hovered close to the deck before breaking off without actually landing.

A bomb detection technician in his suit, along with a highly trained dog, then simulated the tension-filled exercise of detecting a ‘bomb’, which was then shifted to a specialised explosive containment vehicle with the help of another remotely operated device.

An ALH then staged jaw-dropping manoeuvres, including a few sharp turns, sudden stops and sharp drops, before tipping a salute in the direction of the President and flying past.

A Seaking helicopter, also known as flying frigate, then hovered really low and dunked a sonar beneath the water surface, demonstrating its capability to detect submerged submarines.

Four Fast Interceptor Crafts then sped across each other firing flares in honour of the President. The nearly 40-minute enthralling demo came to a close with a fly-past manoeuvre by the entire fleet of eight helicopters.

Governor Arif Mohammed Khan and Vice Admiral M.A. Hampiholi, Flag Officer Commanding-in-Chief of the Southern Naval Command, were among those who attended the event.