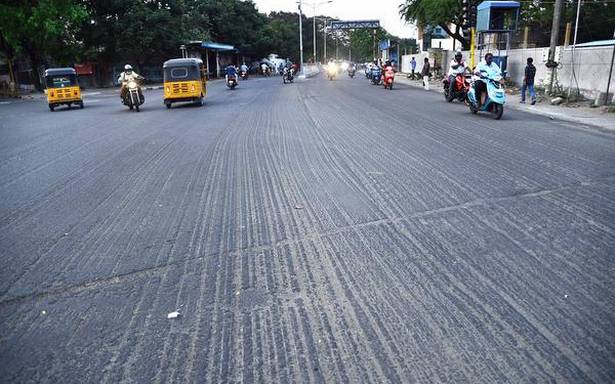 The surface of several roads have been scraped and left unattended

Hundreds of motorists particularly two-wheeler riders are finding it difficult to navigate roads which have been abandoned for weeks after milling in several areas including Anna Nagar and Velachery.

Greater Chennai Corporation had proposed to relay several roads, including bus route roads and street roads, in various parts of the city before the Assembly election.

The roads have been scraped at the top using milling machines a few weeks ago and have been left unattended by the contractors causing inconvenience to the motorists. The poor condition of such roads poses threat to the two-wheeler riders.

T.K. Pandian, a resident of Anna Nagar V Block, said several roads in Anna Nagar, including the 3rd Avenue, have not been repaved though the road had been milled till Shanthi Colony junction. Complaining about the delay in repaving these roads, Mr. Pandian said a little bit of foresight should have gone into executing milling work on these roads.

Similarly, top portion of the Velachery Main Road has been scraped and left incomplete for more than a fortnight from Kannigapuram to Guindy, interior streets in Velachery and Adyar have suffered a similar fate.

The residents’ welfare associations have been requesting the local officials to speed up the repaving work but to no avail.

A senior official of the Corporation said the milled roads had not been repaved because of the announcement of night restrictions.

He said normally roads would be paved only at night because of thin traffic.

Citing several roads, which need to be relaid, he said the civic body had written to the State government and the Tamil Nadu State Disaster Management Authority seeking relaxations and setting guidelines for allowing important civic work to be carried out so that the common people were not affected.