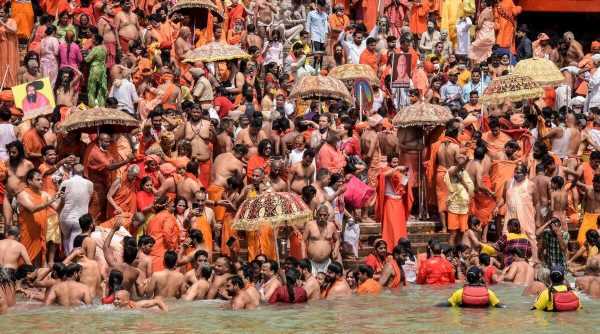 Police personnel also participated in a shahi snan and officials said it was “symbolic”. Before the shahi snan Tuesday, Gunjyal visited every akhara camp to ensure attendance was restricted. Three days before the Kumbh Mela in Haridwar comes to an end, around 1,350 seers from various akharas and 25,000 devotees bathed in Brahmkund at Har Ki Pauri during the last shahi snan on Tuesday — nearly 1 per cent of the total attendance expected by the authorities for the shahi snan on April 27.

Hours later, the Haridwar district administration announced a ‘corona curfew’ in Haridwar in the evening. It will be effective from April 28 to the morning of May 3.

After an appeal by Prime Minister Narendra Modi and amid criticism over violation of Covid protocols at the Mela, the akharas had agreed to mark a symbolic Kumbh Mela to avoid any new coronavirus infections.

IG Kumbh Mela, Sanjay Gunjyal, told The Indian Express, “Following appeal from the Prime Minister and constant review by the Chief Minister, akharas cooperated in keeping the crowd low today. There were meetings with akharas daily over the last three days on crowd management. They followed social distancing too. Even Naga sadhus wore masks.”

Police personnel also participated in a shahi snan and officials said it was “symbolic”. Before the shahi snan Tuesday, Gunjyal visited every akhara camp to ensure attendance was restricted.

According to data shared by the police, around 85 seers from Niranjani and Anand akhadas, 250 from Juna, Agni and Ahvaham; 80 from Mahanirvani and Atal; around 600 from Nirmohi, Nirvani and Diganmbar, around 230 from Bada Udaseen and Naya Udaseen and 100 from Nirmal akhara took part in the shahi snan Tuesday.

Juna Akhara spokesperson Mahant Narayan Giri said, “In view of appeals from Prime Minister Narendra Modi and Home Minister Amit Shah, we kept the shahi snan symbolic today. Around 5,000 seers and followers with 150 chariots had taken part in each of the past three shahi snans… Around 90 per cent seers and followers who had come from other states have already returned.”