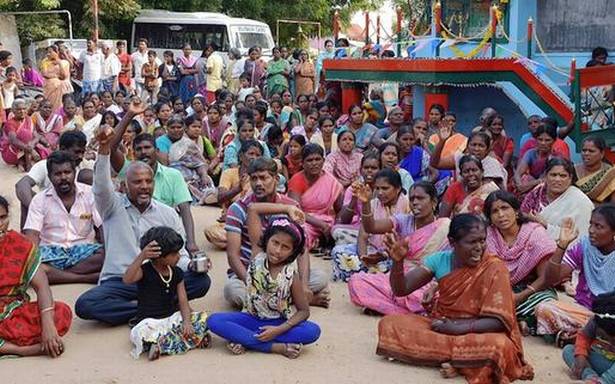 Environmental promises have made a visible entry into Tamil Nadu’s politics, along with a guarded valourisation of farmer and fisher rights over big-ticket infrastructure and industrial projects. All key parties in the 2021 Assembly polls barring the AIADMK dedicated a section for “environmental protection” in their manifestos. Setting aside the justified cynicism about fulfillment of poll promises, the appearance of environment as a political concern worth flagging signals a welcome cultural shift in Tamil politics. It would be a folly to dismiss these promises as tokenism. That would disregard the power of earlier culture-shaping projects such as the Self-Respect Movement and the depth of Tamils’ linguistic identity in birthing local brands of environmentalism. Agriculture, rather than industry, as a defining identity of Tamil Nadu has found new currency.

However, two anxieties mar the positivity of these political developments. One is that an environmentalism rooted in healthy self-respect should not degrade into a ‘blood and soil’ subset of a chauvisnistic Tamil nationalism. This fear, though, is mitigated by a dominant discourse that draws from inclusive traditions of Periyar, Ambedkar and even Marx. The second is an ominous certainty that the political class does not understand the urgency and magnitude of the planetary ecological crisis.

More than a new awakening within the political class, the shift is proof that politics in Tamil Nadu is populist and responsive to people’s aspirations articulated primarily through the medium of protests. Protests and agitations have shaped Tamil political culture. The decade has been especially busy. If anti-Hindi agitations launched the Dravidian era in politics, it would not be an overreach to say that the anti-nuclear protests from 2011 to 2013 launched a movement with a distinctly Tamil flavour to protect land, water and livelihoods from state-supported corporate grabs. The non-violent sit-in by fishers against the Kudankulam nuclear plants in the coastal hamlet of Idinthakarai failed to stop the project, but it forced a nationwide debate on nuclear energy and the right of people to participate in environmental decision-making in the face of obstinate, powerful and irate adversaries. The fallout of the protests left even avowedly pro-nuclear parties like the CPI(M) and agnostic pro-industrial parties like the DMK with weaker appetites for nuclear projects.

Cultures are products of intersectionalities. The genetic make-up of themes portrayed as environmental in political manifestos are drawn not merely from campaigns against power plants, expressways, ports and polluting industries, but also from the gene pool of earlier and coterminous social protests and events.

Consider the string of major protests between 2009 and now: against the Sri Lankan war and Mullivaikkal massacre; against nuclear projects; against coal-bed methane extraction in the delta; against Unilever’s mercury pollution in Kodaikanal; by fishers to save Ennore Creek from industrial encroachments; pro-Jallikattu; against hydrocarbon extraction in Neduvasal, Pudukottai, which subsequently spread like wildfire through other delta districts; against Sterlite, crony capitalism and industrial pollution; by farmers against the Salem-Chennai expressway; by fishers and farmers against the International Container Transhipment Terminal in Kanniyakumari; and against Adani’s Kattupalli port expansion. The State and Central governments are adversaries in each of these campaigns. Many in Tamil Nadu view the Union government as north India-centric, and indifferent, if not inimical, to the interests of southern States. Each of the above projects is seen as a grandiose Central government imposition that hurts local ecologies, farmers and fishers to squeeze out value for distant beneficiaries.

Meanwhile, extreme weather events have been posting annual reminders of the looming climate crisis: the Chennai floods (2015), Cyclone Vardah (2016), Cyclone Ockhi (2017), Cyclone Gaja (2018), Chennai’s Day Zero and water scarcity (2019). The muted and muddled responses of Centre and State to these disasters has also reinforced arguments of neglect by the Centre and mishandling by the State.

Against the backdrop of this bleak canvas, it is refreshing that at least four parties – DMK, Naam Tamilar Katchi, Makkal Needhi Maiam and Pattali Makkal Katchi – have dedicated environmental wings with youngsters at the helm. Aided by a vengeful climate and restive communities, the youthful environmental wings, one hopes, will improve the ambitions of their parties and help the political class appreciate the gravity of the unfolding ecological disaster. That will happen only if the young leaders in these parties are rooted in an understanding of social justice, caste hierarchies and the history of progressive Tamil movements, as articulated by intellectuals like Thol. Thirumavalavan of the Viduthalai Chiruthaigal Katchi. Without that, environmentalisms rooted in notions of cleanliness, purity and meritocracy run the risk of becoming elite oppressions.

The future is fearsome. A recent article in American Geophysical Union’s journal warns of sweeping heat waves. Leave alone “future consequences of continued warming, some areas in [South Asia] are already getting exposed to deadly heat stress conditions even at the current warming levels,” the article reports. Even if temperature rise is kept to 1.5°C as targeted in the Paris Accord, coastal Tamil Nadu can expect lethal heat waves every two years.

At current emissions rates, the world will exceed the 1.5°C danger threshold by 2030. Averting catastrophic change by keeping to the threshold is possible only if emissions are cut by 7.6% every year for the next decade. That’s difficult; emissions fell by a meagre 6.4% percent in 2020 despite the pandemic-induced economic lockdowns, scientific journal Nature reports.

Modern economy is fatally coupled to planet-threatening carbon emissions and degrading land use change. In 2019, 11,258 experts from 153 countries issued a ‘Warning of a Climate Emergency’. “Our goals need to shift from GDP growth and the pursuit of affluence toward sustaining ecosystems and improving human well-being by prioritising basic needs and reducing inequality,” they wrote.

In prioritising agriculture, forests, fisheries and water over hydrocarbon extraction, expressways and megaports, Tamil Nadu’s politics may have flagged just such a value shift. Politics, with its embedded values of people’s aspirations and relationship to land, is deep. The environmentalism of parties, politicians and manifestos, however, is shallow and demands work. The same parties that condemn the Kattupalli port and the expressway contradict themselves with uncreative promises of coal-fired power plants, energy-guzzling desalination plants and a second international airport in Chennai.

Communities have their work cut out. They have to forge a path of radical departure from the ecocidal growth-obsessed economic pathway, and urge their leaders to follow. That is a gargantuan task considering that this pathway to avoiding ecological collapse would be, to put it mildly, economically inconvenient.

Nityanand Jayaraman is a Chennai-based writer and social activist