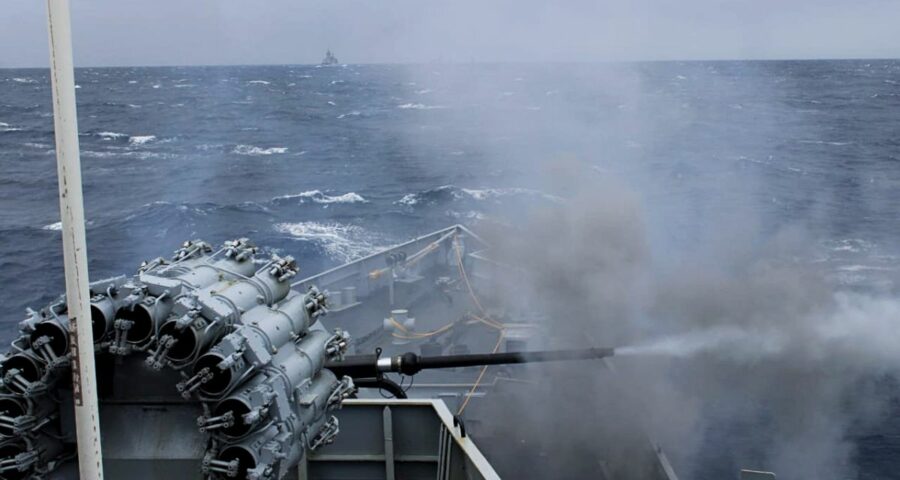 The coming together of the Quad and the Australia-UK-US grouping would be a formidable adversary, moving toward the creation of a ‘thousand ship navy’ that reins in the PLA navy in the Indo-Pacific, explains Ajai Shukla.

Last month, navies of the four quadrilateral countries — Australia, India, Japan and the United States of America — trained together in the Sea of Japan in the annual event that has been named Exercise Malabar.

This year’s Malabar, hosted by Japan in the Western Pacific, focused on countering attempts by China’s People’s Liberation Army to take over Taiwan, or to enforce Beijing’s claims over disputed islands in the South China Sea and East China Sea.

This provides an opportunity to look at the Indian Navy’s wartime strategies against our two major adversarial navies — the PLA navy, or PLAN, and the Pakistan navy, which is far less capable than the PLAN, but a formidable adversary nevertheless.

Malabar is a sophisticated and realistic exercise hosted in turn by the four Quad navies. It creates ‘inter-operability’ by making the four partner navies cooperate in combating simulated contingencies.

For example, an Australian submarine could simulate a PLAN submarine that is trying to sneak into the Indian Ocean through, say, the Sunda Strait. In Exercise Malabar, an Indian P-8I Poseidon maritime reconnaissance aircraft could be tasked to detect the submarine, for which the superbly equipped P-8I aircraft would activate its sonar, radar and magnetic anomaly detectors.

The adversary submarine’s signature would be passed through a library that would identify the vessel by matching its signatures, in real time, with a worldwide bank of warship signatures, painstakingly built up over time.

Having located and identified the enemy submarine, the job of destroying it would be allocated to a P-8I, or an anti-submarine corvette, or to one of our own submarines.

For communicating with our submarines, India would use a very low frequency or VLF signal, transmitted through a shore station, such as Indian Naval Ship Kattabomman, near Tirunelveli, whose 471-metre high antenna is the world’s tallest military structure.

The Quad navies carry out these simulated ‘locate-identify-destroy drills’ all year, in anti-submarine patrols that are in sync with their respective national security strategies.

To conform to the global maritime framework, India signed (1982) and ratified (1995) the United Nations Commission on Laws of the Seas, which lays down a legal regime for the seas.

International maritime law originated in 1603, when three Dutch gunboats seized a Portuguese Carrack (large cargo ship), with a cargo so valuable that it doubled the annual income of the Dutch East India Company.

The outraged Portuguese demanded their ship back and, after a heated debate within Holland over ethics, the famous jurist, Hugo Grotius, was hired to write an international maritime treaty.

The result was the famous Mare Liberum (the Open Seas), which postulates that the seas are mankind’s common heritage and everyone enjoys freedom of action on the high seas — something that Beijing disputes today.

Mare Liberum holds that, if two nations declare war on each other, they can destroy or seize each other’s vessels anywhere in the world.

If India and China were at war, Mare Liberum permits both to legitimately destroy each other’s shipping in, say, the Atlantic, or the Southern Ocean.

The bloody German submarine (U-boat) campaign in World War II, which sank 3,500 Allied merchant ships and 783 German U-boats, was legitimate, says Mare Liberum, because the UK and Germany were formally at war.

In the film, Master and Commander, set in the Napoleonic Wars, British and French warships were legitimately fighting off the Galapagos Islands, in the South Atlantic. And during the American war of Independence, the peaceful city of Madras found itself being bombarded by French warships that had sailed from its colony, Mauritius.

Indian strategists miscalculate that, in a Sino-Indian war, the Indian Navy could legitimately bottle up Chinese shipping in the South China Sea by blockading the four entries into the Indian Ocean — the Straits of Malacca, Lombok, Sunda and Ombai Wetar.

In fact, Grotius did not provide for blockading ships of only one country. In the 1971 India-Pakistan war, the Indian Navy blockaded Karachi, but had to call it off after just one day because a comprehensive international blockade would be needed that did not distinguish between vessels.

Theoretically, the Indian Navy could have sent warships or submarines to deter shipping to and from Pakistan, but that would have carried unforeseen escalation risks. What if Beijing responded to an Indian Navy blockade of Karachi with the announcement: ‘Our merchantman is coming into Karachi, escorted by a destroyer and a frigate.’

Clearly, there is a need for flexible terminology — ‘exclusion zone’ or ‘mobile exclusion zone’ — that could provide the cover for imposing a blockade on Malacca or Karachi. The Pakistan navy, while significantly smaller and weaker than India’s, has a plan. War gaming with Lanchester’s equations — which calculate the incremental attrition between opposing forces engaged in violent confrontation — suggest that if the Indian Navy brought all its power to bear on the Pakistan navy fleet, the latter would cease to exist within 24-48 hours.

Therefore, the Pakistan navy avoids confronting the Indian Navy in the open sea, where Indian firepower would devastate it quickly.

Instead, the Pakistan navy is likely to withdraw to coastal areas where shore-based Pakistani aircraft would provide cover and different calculations would apply. Here, the Indian Navy would not benefit from its superior numbers.

With the Pakistan navy unwilling to join battle, the Indian Navy would have to locate and engage it in coastal waters. The Indian Navy’s first problem, therefore, would be to find a way of negating the Pakistan air force’s air power. The solution came in 2001, when the induction of the Israeli Barak missile, with its accuracy and range of 15 kilometres, provided the Indian Navy its first potent air defence capability.

This has now been enhanced with the long range surface-to-air missile, which dramatically extends engagement ranges to 70 kilometres. This allows the Indian Navy to approach the Pakistani coast with greater impunity.

Playing a major role in naval warfare now are Pakistani long-range maritime patrol aircraft like the P-3C Orion, or the Indian Navy’s P-8I Poseidon. These aircraft provide aerial search-and-attack options, with operating endurances of up to 16 hours and a weapons payload of anti-ship missiles, anti-submarine torpedoes and depth charges.

A long-range maritime patrol aircraft can fly stealthily, using electronic warfare suites to avoid detection while it manoeuvres into a position from where it can launch an anti-ship missile.

However, its location gets compromised as soon as it fires the missile. For the target vessel, or flotilla, the challenge is two-fold: First, the incoming missile must be shot down before it hits a ship. Second, integral air assets must ensure the aggressor aircraft does not get away.

The mathematics goes against the Pakistan navy’s long-range maritime patrol aircraft. The long range surface-to-air missiles that will now be standard fitment on new Indian Navy warships has a 70-kilometre range, well beyond the Pakistani anti-ship missiles’s range of about 50 kilometres.

With INS Vikramaditya and INS Vikrant fielding long range surface-to-air missiles systems and launching MiG-29K fighters from their decks, the question of a Pakistani long-range maritime patrol aircraft launching a missile and getting away should not arise. Finally, it must be noted that, with the PLA navy being the fastest-growing navy in the world, the possible provision of basing rights by Pakistan, Sri Lanka and by East African States like Djibouti provide it a forward presence in the Indian Ocean.

Even so, the coming together of the Quad and the Australia-UK-US grouping would be a formidable adversary, moving toward the creation of a ‘thousand ship navy’ that reins in the PLA navy in the Indo-Pacific.