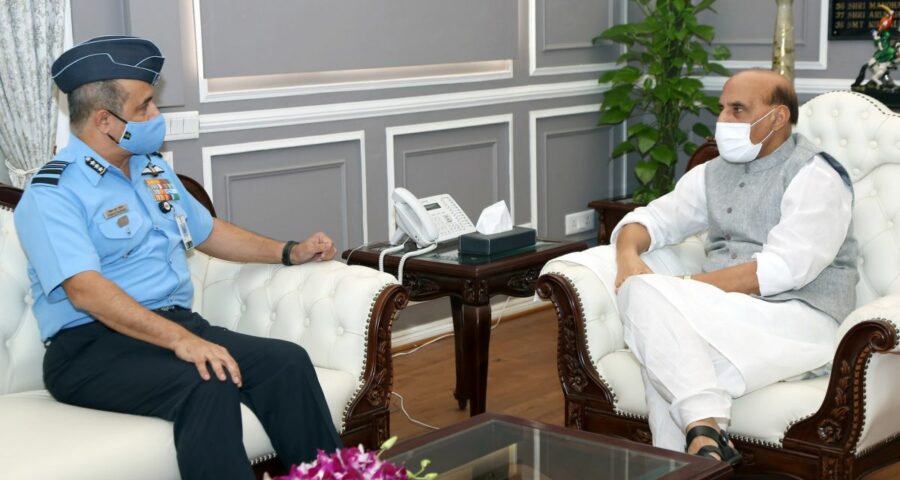 Air Marshal Vivek Ram Chaudhari, who will head the IAF from October 1, will keep our fighting capabilities sharpened and operationally ready for conflict at all times, notes Air Commodore Nitin Sathe (retd).

On October 1, Air Marshal Vivek Ram Chaudhari will take over the hot seat of heading the Indian Air Force from Air Marshal Rakesh Kumar Singh Bhadauria who retires after a 23 months tenure as the chief of the air staff.

My first meeting with Air Marshal Chaudhari was at the National Defence Academy where he was a sixth termer while I was in the second term.

Thereafter, I bumped into him on numerous occasions while we went through our careers in the IAF.

Till the time I met him in Allahabad in 2009, I really hadn’t got to work with him or know him close enough.

In 2009, when we finally interacted, he was looking after fighter operations as the Air-1 of Central Air Command while I was busy involved in ‘Operation Triveni’ which was launched to help the central paramilitary Forces to counter the Naxalite threat.

We soon began talking over long walks on the campus of the Air Force Station at Bamrauli and I realised that there was so much to learn from this man.

As we built up on our mileage, we spoke about all things strategic and tactical and also cribbed about what was ailing the armed forces and the IAF in particular.

I was later able to use some of his lessons when I became a commander myself.

We also found time to regurgitate our past at the NDA during the numerous interactions we had.

At that time, all calculations pointed to the fact that he would be CAS one day.

When we talked about it, he would laugh it off with a wave of his hand.

I wasn’t aware for quite some time that he was a Maharashtrian like me.

Neither did he indicate his lineage; and like a true soldier, he never thought it relevant that we knew which pigeon-holes we belonged to.

Much later I discovered that we had some family connection albeit a long convoluted one.

As president of the Air Force Selection Board, I had the opportunity of working directly under him for the first time whilst he handled the all-important office of Assistant Chief of Air Staff-Personnel.

Whilst we interacted and discussed various issues of manning and selection of officers in the IAF, I realised how competent a professional he was.

A soft spoken, kind hearted ‘gentleman’ to the core, he always had time to hear us guys from the field cry our hearts out.

He understood our problems, and when it was time for him to speak, he spoke with authority, and took decisions keeping the interest of the IAF foremost in his mind.

He is a thorough leader with deep knowledge of how to synergise the operations, administrative and technical verticals of the IAF to keep our fighting capabilities sharpened and operationally ready for conflict at all times.

At work, since he had immense faith in our abilities to deliver, he allowed us adequate space to function independently.

There wasn’t a single time when we felt we were being micro-managed.

At Air HQ, despite the extremely busy schedule and heavy load of work, he would have the time to see officers from the field and attend to their problems of postings and other HR related aspects.

I do believe that he was able to take the ‘happiness quotient’ of the IAF to the next level during his tenure.

He is now all set to take over as the 27th chief of the fourth largest air force of the world.

I am quite sure that we would see the IAF touching the sky with further glory in his tenure.

My only regret is that I am now a veteran and won’t be able to work alongside him under his command!

IAF Veteran Air Commodore Nitin Sathe is a helicopter pilot who served the Indian Air Force for 35 years and was part of United Nations Peace Keeping Force operations in the Congo.