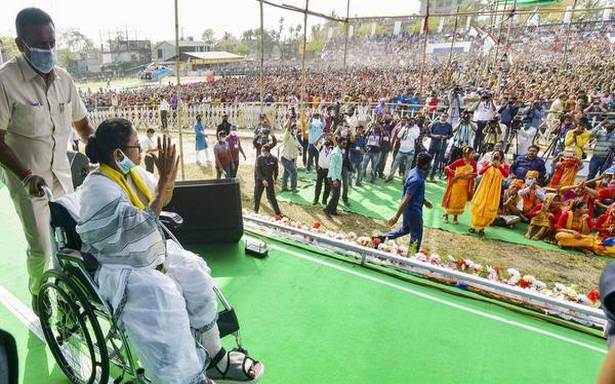 West Bengal Chief Minister Mamata Banerjee on Friday resumed her campaign in districts and asserted that she is winning the Assembly election at Nandigram. The Chief Minister held three rallies at Dinhata, Natabari and Falakata.

Reacting to a remark by Prime Minister Narendra Modi that she could contest from a seat other than Nandigram, Ms. Banerjee retorted that she was not a member of his party.

“I want to tell the Prime Minister to control his Home Minister first and then try to control us. We are not your party’s members,” Ms. Banerjee said, addressing a rally at Dinahata in Cooch Behar district. “I have contested from Nandigram and will win from there,” she added.

She also added that she went to a polling booth in Nandigram on Thursday only because she received a complaint that goons had come from outside and gathered there with guns.

The Chief Minister urged people to elect the Trinamool Congress in at least 199 seats, adding that “anything less than that will mean they (BJP) will buy the ‘gaddars’ (traitors)”. Ms. Banerjee has been referring to leaders from her party who have joined the BJP as traitors.

The Nandigram constituency remained at the centre of political discourse. According to the updated voting percentage provided by the Election Commission, the constituency recorded 88% polling on Thursday .

Representatives of both the Trinamool Congress and the BJP both met the Chief Electoral Officer in Kolkata and raised allegations against each other. The BJP delegation, led by party leader Sishir Bajoria, questioned why the Chief Minister had stayed inside a polling booth for more than two hours and accused her of violating the model code of conduct.

The Trinamool delegation, which was led by party leader Yashwant Sinha, said that the delegation told the Election Commission that the role of Central forces has been partial in many booths in the first two phases. “There have been incidents of violence and attacks on our party supporters by the BJP. We have asked the EC to see to it this is not repeated in the next six phases,” Mr. Sinha said.

Addressing a public meeting at Natabari in Cooch Behar, the Chief Minister accused Home Minister Amit Shah of using Central agencies to target Opposition parties. Ms. Banerjee said that leaders from Tamil Nadu, where Assembly polls are scheduled in next few days, had contacted her over income tax raids on relatives of DMK leader M.K. Stalin, claiming that these were done at the behest of the Home Minister. She accused Mr. Shah of trying to scare his political opponents. “BJP is distributing huge money, has hired more than 1,000 hotels and is coming with goons from other States,” she said.