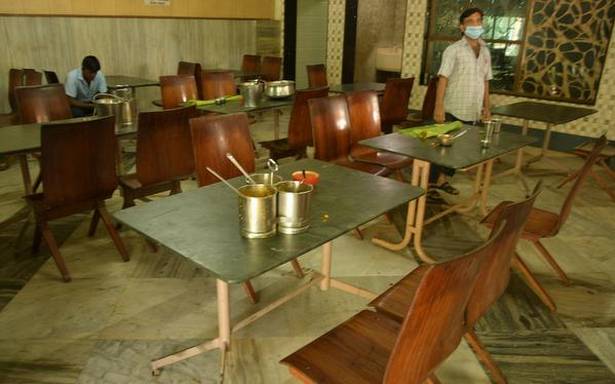 Hundreds of restaurants across Tamil Nadu are up for sale, and many have shut down in the last three months after the second wave of COVID-19 hit the State.

Sources said the data were yet to be collated, and the number would be clear only after the lockdown was lifted completely. But those in the real estate sector said several restaurants in Chennai, Coimbatore, Salem, Tiruchi and Madurai, among other places, had put themselves up for sale. A similar trend was seen last year after the first wave struck. Then, those in the hotel industry said over 2,000 small, medium and big restaurants had folded up.

“With news about the third wave doing the rounds, those in the business do not want to take any chances. Some of the properties that have been put up for sale are on State and National Highways, some are near schools and colleges and some near information technology corridors. Those who have taken franchises from bigger brands are also struggling to sell,” said a source in the hotel industry.

He added that restaurants near movie halls and other public places had closed permanently.

Sukanya Bhaskaran, who runs a franchise of a fried chicken brand on Santhome High Road, said her business dwindled by over 90% and she had no other option but to put it up for sale. “My employees who left during the first wave never returned, and there was a huge pressure from the landlords to pay up the rent. Sales were low and we hardly got orders through food aggregators,” she said.

“Earlier, people used to stop along highways to have food and refreshment. After the pandemic, the number has dropped. Buses have stopped halting at too many places. Lorry drivers are operating on tight schedules, having no time to stop,” said Ashokan, who is into the restaurant business for seven years now. “I have two restaurants on the Salem highway and I have closed one, and put up all the assets and the second hotel for sale.”

Restaurant owners pointed out that labour costs had gone up. “If you don’t pay the workers, it is difficult to retain them,” said one of them. Even bigger brands seem to be struggling after the second wave, and some have wound up a few branches.

M. Ravi, president of the Chennai Hotels Association and chairman of Vasanta Bhavan Hotels India, said many small hotels had vanished, and there were no takers for the spaces opened up for sale. “Losses have been mounting for those in this business,” he said. Mr. Ravi has closed a few branches across the State.

K.T. Srinivasa Raja, managing director of Adyar Ananda Bhavan Sweets India, said hotels hardly got 15% business through food aggregators and takeaways. “We have also closed some of our branches,” he said. He added that those who supported the restaurants, such as vegetable and milk vendors and raw material suppliers, had also lost money.

Most hoteliers and restaurant owners cautioned that this was not the right time to buy hotels coming up for sale. They said it would take another year or two for the industry to stabilise.