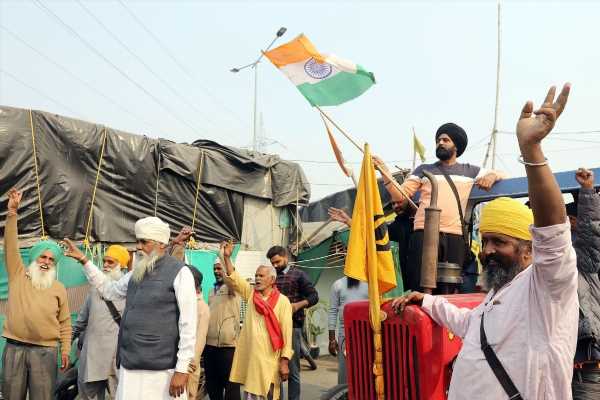 For the past one year, an overwhelming number of farmers have been camping at the Singhu border area of Delhi, braving by turns biting cold, monsoon rains, COVID pandemic scare and also accusations of ‘creating obstructions,’ but the spirit of solidarity has allowed them to soldier on against all odds.

The Singhu border between Delhi and Haryana was the fountainhead of the farmers’ protest seeking to repeal the three contentious farm laws, and from there the movement had gradually expanded to Ghazipur border touching Uttar Pradesh and other sites.

On Friday morning, when Prime Minister Narendra Modi announced that his government has decided to repeal the three farm, there was a sense of relief among the farmers present at these sites.

The announcement by the government came just a few days ahead of the first anniversary of the beginning of the movement, whose seeds were sown late November last year, and it coincided with the auspicious occasion of Guru Nanak Jayanti.

So, how did the farmers, who had left their homes and families behind, sustain this movement over the year? A likely answer is food, unrelenting spirit, and an army of volunteers who held this agitation, literally with their hands, day in and day out.

While the centrestage of this protracted battle has been on the streets, but the fire in the belly of the farmers, was sustained by the flames burning in the kitchens backstage.

Aggrieved farmers, mostly drawn from Punjab, had arrived at Singhu border on November 26, 2020 answering the Dilli Chalo call of their leaders who have been seeking repealing of the three new farm laws, which they allege will ‘wreck the lives of hard-working peasants.’

On a long stretch straddling the Delhi-Haryana border, fiery speeches on stage, songs of resistance in the streets and and cries of Sadda Haq, Aithe Rakh and Jo Bole So Nihal have been part of the daily life at the protest site.

Community kitchens or langars punctuated the sea of farmers, both men and women, who had descended on the site and had earlier said that they wouldn’t relent or retreat until their demands were met by the Centre.

On Friday, Modi appealed to the protesting farmers to return home, but they appeared in no mood to move.

Palwinder Singh, 45, a farmer from Gurdaspur, who had arrived at Singhu border on day one of the protest along with a jatha to set up a kitchen right in the middle of the highway, had told PTI in January that “a revolution cannot run on empty stomachs.”

“We are farmers who follow teachings of our revered Sikh gurus, and this is Guru ka Langar, all His grace, and we are just the agents of His will. So, we are keeping the fire burning in the kitchen,” he had said.

Friday was a doubly sweet day for these protesting farmers, as the government’s announcement and Guru Nanak Jayanti or Gurpurab fell on the same day.

Some people were distributing sweets and jalebis at Ghazipur border and other protest sites.

But, the nearly year-long journey of protesting farmers have been arduous and painful, beset with tales of loss and longingness, of braving cold waves and water cannons, of deaths and suicides.

Gaurav Yadav, the national spokesperson of Bharatiya Kisan Sangathan who was also performing the special yagya on Friday morning said, “We farmers, have braved monsoon, corona, winters, and faced numerous challenges, but never gave up on our fight.”

The spirit of fighting for a cause displayed by these farmers was bolstered by an army of volunteers who lent a helping hand to them in times of dire need.

Harjiwan Singh, 25, a volunteer with US-based NGO United Sikhs, which performed yeoman service during this struggle, offering aid and succour and counselling to farmers who were suffering from depression and anxiety.

“Today, I am seeing them smiling a bit, but farmers have faced a lot in this one year. They are strong and resilient by nature, but many of them buckled under harsh weather conditions and mental agony suffered due to many factors,” he told PTI.

Singh said that “hundreds of farmers have died during this struggle, and many have committed suicide,” and it will be a fitting gesture, if the government can offer a job to the next of kin of these ‘shaheed farmers.’

Clinical psychologist Sanya Kataria, who counselled many farmers at Singhu border at the height of the protest recalled that protesters went through a ‘cycle of emotions’ during the struggle.

“In groups and in public gatherings, they felt stronger and resilient, but when they retired at night to their trucks and tents, they often felt loneliness, longer for their family, and felt frustration, despair, and a lot of hopelessness,” she told PTI.

The announcement by the government has given them ‘some sense of hope’ and come as a ‘balm on their wounds.’

Kataria said, farmers and volunteer also gave hope to other farmers and inspired the countrymen too and the government taking a decision to repeal the three farm laws, is a ‘testament to their consistent and persistent efforts,’ adding, many volunteers also took teaching classes for children living in nearby slum areas.

“They have gone through a lot, and all we tried to offer them ea a psychological first aid to help them,” they added.

Harjiwan on Friday also recalled that attempts were being made in the past to ‘quell the movement’ by erecting a cement wall on the main highway, cut-off water and electricity supply, and some sections of society blaming them as ‘separatists’ and ‘anti-nationals’ who were ‘creating obstructions.’

He, however, condemned the lynching incident reported in October near Singhu border, saying, “no one can take law in their hands.”

A group of Nihangs had claimed responsibility for the lynching of a man, who was found with his hand chopped off and body bearing over 10 wounds caused by sharp-edged weapons, before he was tied to a barricade at Kundli protest site.