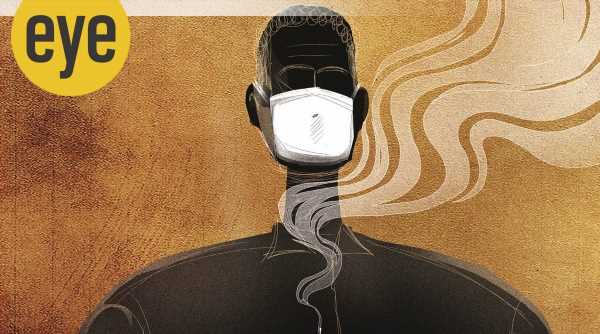 As the second wave hit close to home, a journalist recounts his days and nights in a COVID-19 ward as he watched his father slip away Days before the second wave began rising in Mumbai, I was in rural Bihar, running from one primary health centre to another, investigating how Covid-19 testing record sheets were riddled with false numbers and fake names. It was clear that this was a warning sign of what lay ahead, as I wrote in my stories. A week ago, that wave took my father away.

More than two decades of reporting, most of them at The Indian Express, has taught me that whatever the story, I need to keep a distance because that’s the only way to do justice to the search for truth. I can’t lose the fact that over the last six weeks, many fathers have lost their children, many children have lost their fathers and that mine is just one story.

It was May 1, my wife Chitra’s birthday. But my mind was in my hometown of Tarapur in Bihar’s Munger where my parents live. The previous night, I had video-called my father Sanjay Prasad Singh, a retired English teacher, and chided him for hiding his fever from me. Like a parent who doesn’t want to burden his child, he downplayed everything, dismissing the possibility of Covid-19. But I told his neighbour to get an oximeter. The first SpO2 reading was 87. When my father walked a few steps, it rose to 90. But within the next two hours, the reading slipped to 83. I was on the road, like countless others across the country, to get him a bed.

Doctors referred my father to Mayaganj Hospital in Bhagalpur. My parents’ house attendant and the neighbour accompanied my father in an ambulance; my sister and brother-in-law moved in to take care of my mother who has Parkinson’s. I took a taxi from Patna to Bhagalpur. My children were in tears, out of concern for their father. They knew I was going to a Covid ward. I was in tears, too, out of concern for my father.

The six-hour journey to Bhagalpur seemed endless. By the time I reached Mayaganj, my father had been given a bed. Masked and face-shielded, I entered his COVID ward. COVID-19 protocols lay in tatters across the floor. There were at least two family attendants for each patient, and some were even sharing the bed. No senior doctor would visit, nurses never emerged from their room. Your patient was your headache.

I worked my phone. For a reporter, sources are sacred, not to be used for personal favours but only for a story. I have to confess that an official pitched in, helped me move my father to the Indira Gandhi Institute of Medical Sciences (IGIMS) in Patna the next day. Doctors and nurses reacted quickly and started the first line of treatment. My father was semi-conscious but was responding and asking for water frequently. His eyes would light up whenever he saw me. My cousins changed his diapers, it seemed as if the world was working together to help my father.

As I settled down in the ward with a PPE gown, a double-mask and a face shield as the only line of defence — even while sleeping —I watched the IGIMS nurses, just two in a shift, bearing the brunt of despair and anger of the patients’ relatives. My father, meanwhile, had started showing signs of improvement with steroid therapy but his SpO2 level remained in the 80-85 range.

On May 5, my younger brother joined me. I slept on a plastic mat beside my father, and would wake up at least thrice in the night to give him water and vitamin solutions. Chitra held the fort at home, sending food for us — our children were at her parents’ home. That evening, a woman who was on the adjoining bed died, and a man was shifted to the ICU. Two daughters from Siwan, one of them an electrical engineer, gave us hope when their father pulled through. “If a family does not provide support in these times, the very foundation of a family will crash,” one of them said.

The next morning, my father’s SpO2 dropped to 63. I asked doctors if Remdesivir would help, they did not reply. Around 9.30 am, the monitor readings became highly erratic — the pulse climbed to 223, then dipped to 23. I asked for another monitor, little knowing that my father was sinking fast. The doctors checked his pulse. The oximeter reading was zero. The oxygen tubes were removed. I knew it but still asked why they had removed the oxygen. “He is no more,” said the doctor.

My father was gone. The man who had taught English to three generations in Munger, Bhagalpur and Banka was gone. The man who was the only teacher for 50 villages in the Naxal-hit Gaya region of Anti was gone. The affable “Sanjay Sir” of Tarapur had left.
But this was not the way he, and many more like him, should have died — treated like untouchables in their final hours. My eldest sister was clear, though: “Papa should have his favourite white kurta, dhoti and a red pen”.

With the lockdown in place, it was quite a task, but social worker Mukesh Hisariya, who has so far helped cremate 700 COVID patients free of cost, stood like a brother, getting a shopkeeper to open up. BJP leader Sushil Modi, who lost his brother to COVID-19 on May 2, facilitated my father’s cremation in Gulbi Ghat of Patna. Gulbi Ghat staffer Bhim ensured all arrangements, including getting my father’s favourite mangoes. Two of my three brothers — Paramtosh from the US and Mantosh from Katni in Madhya Pradesh, both bankers — were on video-call. I recalled that my father, who had seldom evoked God in his life, had chanted “Ram, Ram, Sriram, Sriram” in his final days. His face was calm.

After two-and-a-half-hours, my father was a small heap of ashes, still smouldering. My younger brother Ashutosh, a banker in Delhi, held his urn in a Ramnami sheet. The two of us turned the urn into the river. When we looked back, it looked as if the urn was flowing towards us, to bless us one last time. We stood for a while, till the urn settled. “Good bye, Papa,” we said, together.

The image of that urn, of my father wrapped in plastic, will stay with me as long as I live along with the countless images that give me strength, hope and happiness. For, deep down, I know a father can never die, a teacher can never die.

At least, as a footnote, I need to be a reporter, not a son.

So, here goes: Sanjay Prasad Singh, who taught English at schools in Munger and Gaya for more than 35 years, died of COVID-19 on May 6. He was 77. He is survived by his wife, five children and nine grandchildren. Singh was a popular teacher. At the height of the Maoist insurgency, when rebels forced schools to close down, they spared his Anti High School in Gaya because he was the headmaster.

In 1986, he moved to Adarsh High School, Tarapur (Munger), a transfer that ensured his children got a proper education. One is a journalist, the other three are bankers — one in Delhi, one in Katni, the third in Los Angeles.

A proud father, Singh was excellent at cards and carrom but, by most accounts, a sore loser.

When a son wrote his first book, Ruled or Misruled: Story and Destiny of Bihar (2015), he donated it to RS College, Tarapur, where the son had done his Class XII. When his son asked why he had given away his personal copy, the father said: “Now that it’s in the library, more people will read it. And they will know it has been written by Sanjay Sir’s son.”

Although Wren & Martin was his basic grammar text, Singh devised his own rules. English, he said, is nothing but “subject + verb + object”.
“If one knew the tenses, past, present and future,” he once said, “half the job is done.”

(Santosh Singh is assistant editor, The Indian Express and lives in Patna)